The History of Ford Design


Did you know that Ford Design Department was established in 1935? And it wasn’t Henry Ford’s idea. It was his son Edsel Ford, who wanted to create cars that were not only functional but also nice to look at. The first designer hired by Edsel was E.T. “Bob” Gregorie, who had been a shipbuilder. But that process translated to designing autos. He brought the “styling bridge,” a U-shaped structure that rode on a series of parallel rails, which helped when it came to getting coordinates that could later be used on other car models, too.


Obviously, cutting-edge design existed from the start, when in 1908, the Model T changed the automotive industry forever. We can say that, even though the forward-thinking design of the era had an emphasis on mobility and not on color, since it was offered only in black!


The first vehicle from Ford Design Department pretty much blew everyone’s mind and put the spotlight on the design process: the Lincoln Zephyr in 1937. It sparked conversation due to having a horizontal grille – something that remains on Lincoln vehicles today. The following year brought the first vehicle for the Mercury brand, the Mercury 8, and its style heavily reflected Edsel’s design sense. 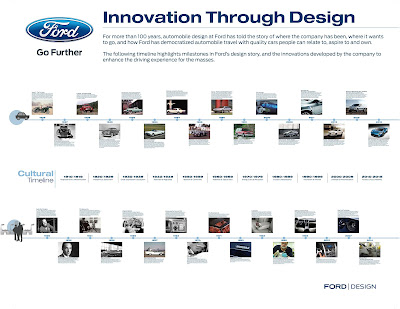 
World War II caused a pause in the production of automobiles, so in 1942, Ford stopped civilian vehicle production and made military equipment instead, including planes and tanks. When the war ended and the auto industry was back up and running, all eyes were on the new 1949 Ford. It didn’t disappoint, with its integrated fenders, chrome trim and aviation-reminiscent center grille design.


It’s hard to imagine now just how groundbreaking the F-Series was back then, thanks to its contours, integrated headlights, ability to tow and emphasis on cargo, since they’re the standard today.


Ford has been leading new trends, and creating new principles and new ways to design, and the decades have brought incredible achievements, from the Thunderbird and Mustang to the Explorer and Focus Electric. Plus, the aluminum-alloy-bodied 2015 F-150 was a game-changer, although interesting materials used in Ford vehicles happened even back in 1941, with the Soybean Car, which was a plastic vehicle made of soybeans, flax and other natural elements.


Concept vehicles and other technological advancements inside and out also left an indelible mark in the Ford Design Department work. The 1955 Futura, for example, featured pearlescent, a new paint technique that, as the name implies, utilized crushed pearls. A retractable hard top that electronically folded into the truck debuted in 1957, while the power sunroof arrived in 1971.