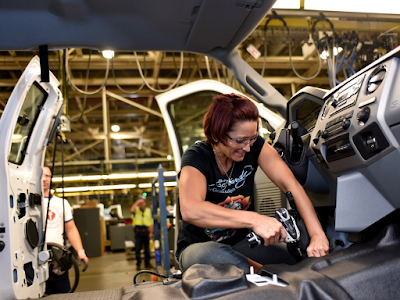 AVON LAKE, Ohio, Aug. 12, 2015 – All-new Ford F-650/F-750 medium-duty trucks roll off the line today for the first time in the United States. Production of the trucks at Ohio Assembly Plant, previously built in Mexico, helps secure more than 1,000 hourly UAW jobs and a $168 million plant investment in the United States.

“Our investment in Ohio Assembly Plant reinforces our commitment to building vehicles in America and to delivering best-in-class commercial trucks,” said Joe Hinrichs, Ford president, The Americas. “Working with our partners in the UAW, we found a way to make the costs competitive enough to bring production of a whole new generation of work trucks to Ohio.”

Offered in Regular Cab, SuperCab and Crew Cab body styles and in straight-frame, dock-height and an all-new dedicated tractor model for heavy towing applications, the 2016 F-650/F-750 line features a bold new look inside and out.

Ford is the only medium-duty truck manufacturer that designs and builds its own diesel engine and transmission combination – ensuring the powertrain will work seamlessly with all chassis components and vehicle calibrations.

Along with its 6.7-liter Power Stroke® V8 diesel engine option, Ford remains the only automaker to offer a gasoline-powered engine in the medium-duty truck segment. The 6.8-liter V10 with 320 horsepower and 460 lb.-ft. of torque now will be available for both F-650 and F-750 models with the heavy-duty TorqShift six-speed automatic transmission. The 6.8-liter can be factory-prepped for converting to compressed natural gas or liquid propane gas as cost-effective alternatives to gasoline.

In 2014, Ford announced a $168 million investment to shift production of F-650 and F-750 from Mexico to Ohio Assembly Plant, in addition to adding new body shop equipment and other tooling needed to produce the medium-duty vehicles. The production shift from Mexico is part of the collective bargaining agreement Ford and the United Auto Workers negotiated in 2011.

"Through collective bargaining, we were able to secure production of the Ford F-650/F-750 to Ohio Assembly Plant,” said Jimmy Settles, UAW vice president and director, National Ford Department. “Building these world-class vehicles in America helps secure jobs for more than 1,000 UAW members and provides economic growth for the Avon Lake community. Strengthening the economy through job creation continues our efforts to rebuild the American middle-class and communities all across this nation.”

Opened in 1974, Ohio Assembly Plant employs nearly 1,400 people and is one of the largest employers in Lorain County. In addition to now producing all Ford F-650 and F-750 models and configurations, the plant also produces Ford E-Series cutaway vans and stripped chassis.

2016 Ford F-650/F-750 trucks are the toughest, smartest, best-value Ford medium-duty trucks ever – providing the ideal combination of value, capability and upfit readiness in the segment.

These attributes underscore the F-650/F-750’s position as the future of medium-duty trucks:

Ford Motor Company, a global automotive industry leader based in Dearborn, Michigan, manufactures or distributes automobiles across six continents. With about 195,000 employees and 66 plants worldwide, the company’s automotive brands include Ford and Lincoln. The company provides financial services through Ford Motor Credit Company. For more information regarding Ford and its products worldwide, please visit http://corporate.ford.com.
Posted by Northside Ford Truck Sales at 8:30 AM