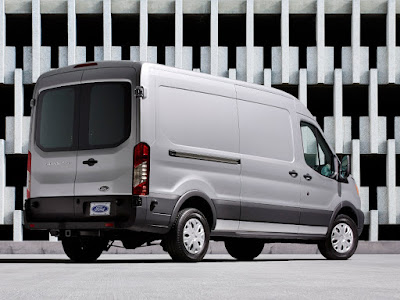 DEARBORN, Mich., Sept. 9, 2015 –
Growing businesses are increasingly turning to Ford commercial vans,making Ford the largest and fastest-growing manufacturer of commercial vans in the United States in the first half of 2015, according to Ford
analysis of IHS new vehicle registrations through June.

Ford vans have been America’s best-selling commercial vans for 36 years, helping businesses transport equipment to job sites, shuttle passengers to their destinations and more. The new Transit, which went
on sale just last summer, can be converted to serve as emergency response vehicles, food trucks and mobile dog grooming studios.


Businesses can choose from 58 vehicle configurations with the introduction of a dual sliding door option on the 2016 Transit van, meaning the vehicle with the most configurations in its class just got
even more flexible.

“Transit customers appreciate the van’s flexibility because it can enable them to right-size their vehicle to the needs of their vocation.” says Yaro Hetman, Ford brand manager for Transit, Transit Connect and
E-Series. “There are 12 ship-through upfitters located within 30 miles of Kansas City Assembly Plant, making it easy and fast for customers to design their Transit vans to serve their business requirements.”

Transit sales success has led Ford to capture 56 percent of the U.S.commercial van market as of June 2015 – up from 48 percent in June 2014, according to IHS new commercial vehicle registration data.

Commercial van sales are increasing as the U.S. economy is growing, and Ford vans drove 80 percent of growth in the segment in the first half of the year, according to Ford analysis of IHS data.


Ford vans are top sellers in 47 states, according to Ford analysis of  IHS data. Those 47 states represent 99.09% of the U.S. population.


Ford Transit Connect, America’s small commercial van pioneer, has been on sale since 2009 and has reigned as the country’s best-seller in the segment for the last five years. Transit Connect leads the small
commercial van segment with 69 percent share and is on pace to have another record year, with commercial sales up 43 percent in the first half of 2015.


About Ford Motor Company
Ford Motor Company, a global automotive industry leader based in Dearborn, Michigan, manufactures or distributes automobiles across six continents. With about 195,000 employees and 66 plants worldwide, the company’s automotive brands include Ford and Lincoln. The company provides financial services through Ford Motor Credit Company. For more information regarding Ford and its products worldwide, please visit http://corporate.ford.com.
Posted by Northside Ford Truck Sales at 9:30 AM