From PickupTrucks.com: We got a chance to see Ford's new F-150 Limited up close and personal, as well as getting us behind the wheel for the first time of the 2013 Ford Super Duty top-of-the-line Platinum model with all the luxury comforts.
Posted by Northside Ford Truck Sales at 3:00 AM No comments:


DEARBORN, Mich., Sept. 26, 2012 – Taking a road trip with your significant other? Chances are good the time together will improve your relationship.

In fact, 91 percent of couples have taken road trips together, and 84 percent agree the experience has strengthened their relationship, according to a new survey of more than 1,000 couples released by YourTango.com collaborating with Ford Motor Company.

YourTango.com, the digital leader in love and relationships, found other interesting relationship tidbits in its survey, as well. For instance, plenty of couples have a “back-seat driver” on board who “helps” the real driver negotiate the road:

After guiding the driver, the second most popular back-seat driving technique involves physical actions like holding the dashboard or pressing an invisible brake. In third place comes gasping and making other sounds of fright.

Finding quality time
Togetherness on the road presents an opportunity for quality time among couples in all sorts of ways.

Sixty-three percent of respondents agree or strongly agree they are affectionate with their partner while driving; they hold hands or share a kiss at a red light. Fifty-seven percent say driving is a good time to discuss important topics with their spouse or partner.

In fact, respondents said their three favorite ways to pass the time are:

“We were excited to learn Ford is eager to provide couples a space to communicate and enjoy quality time together on the road ‒ such an insightful, worthwhile objective,” says YourTango CEO Andrea Miller. “With so many couples struggling with stress and looking for ways to stay connected, we can now offer a new, easy answer: Try going on a road trip!”

The responses to the survey were gratifying to Ford.

“Ford has always believed that getting there is more than half the fun; that’s why we’re so excited about the new Fusion,” said Samantha Hoyt, Ford Fusion Marketing manager. “With its sleek styling, comfortable interior and customer-centered technology, it’s all about taking those good times on the road.”

Comfort is definitely a factor, agree YourTango respondents. Seventy-three percent say a car’s interior affects their level of comfort on the road; 42 percent say the noises their car makes affects their driving experience; and 77 percent say an upgrade to the features of their vehicle would improve their togetherness in the car.

Survey details and additional insights are available on YourTango.com/LoveOnTheRoad. 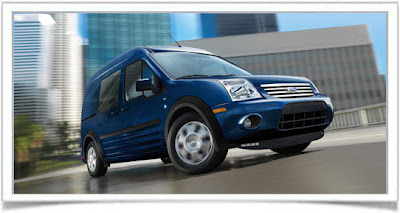 Video shot by television show "World's Greatest" which highlights products from leading manufacturers in their industry.
Posted by Northside Ford Truck Sales at 3:43 AM No comments:


Posted by Northside Ford Truck Sales at 3:00 AM No comments: 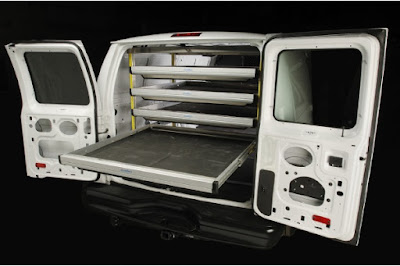 
DuraRac® Shelving System - The DuraRac® Interior Shelving System lets you slide the entire storage system outside your vehicle for easy access. Your van's interior storage has never been used to efficiently! No crawling into the van on an unseen object or tool, pullout shelves bring everything within easy reach! Standard configuration includes three shelves that can be easily adjusted to fit your needs.


Features and Benefits:
Find more Masterack Products at: http://www.masterack.com
Posted by Northside Ford Truck Sales at 3:00 AM No comments: 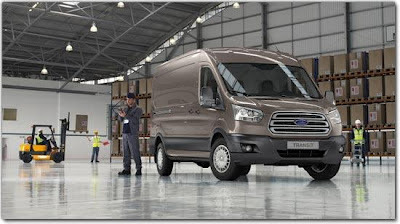 The new generation Transit has been developed under the One Ford product strategy for sale in six continents, including Europe, North America and other key markets worldwide.
Offering a huge range of body styles and derivatives, the all-new Transit is engineered to deliver class-leading load-carrying ability, exceptional toughness and durability, and targets best-in-class fuel economy.

“The Transit van is going global, and we’ve made it more productive, more fuel efficient and tougher than ever before,” said Barb Samardzich, vice president Product Development, Ford of Europe.
“With its legendary Transit and E-Series models, Ford has more experience of creating market-leading commercial vans around the world than any other manufacturer, and this all-new Transit will move the game on once again.”

Within Europe and worldwide markets, the new model replaces the heavier 2-tonne Transit derivatives, and joins the exciting new 1-tonne Transit Custom in the line-up. In North America, where Transit makes its debut, it will eventually take over from the best-selling E-Series range.

Compared to the outgoing Transit, load volume has been increased by around 10 percent model-for-model, with the largest “Jumbo” van now capable of swallowing a massive 15.1 m3 SAE of cargo. In addition, an all-new Chassis Cab SuperJumbo derivative will enable 5 m floats or box bodies to be accommodated.

Particular emphasis has been placed on making the vehicle simple to modify for body builders, upfitters and camper van converters, so all customer requirements can be satisfied.

For Europe, the all-new Transit is powered by the latest 2.2-litre Duratorq TDCi diesel with a choice of three power ratings (100 PS, 125 PS, 155 PS), and a standard 6-speed manual transmission; front-wheel drive, rear-wheel drive and all-wheel drive versions will be available.

In North America, customers can choose from several engines, including the proven 3.5-litre EcoBoost V6 or a powerful diesel option; each features rear-wheel drive and at least 25 percent better fuel economy than a comparable E-Series. Multiple roof heights and wheelbases will be available. North American Transit vans will be manufactured in Kansas City, alongside the Ford F-150.

An all-new interior, with a stylish and functional instrument panel, incorporates a range of smart stowage solutions. The cabin is significantly more spacious than the outgoing model, with increased shoulder room, head clearance and visibility, plus a more comfortable driving position with a fully-adjustable steering column.

The Transit brand has established a legendary reputation for toughness and dependability, and the new global model has been engineered to extend that tradition, starting with its immensely strong unibody construction featuring high-strength and ultra-high-strength/boron steels.

The vehicle has been subjected to Ford’s ultra-stringent global commercial vehicle testing and durability standards, covering millions of miles of arduous testing in laboratories, at proving grounds and on customer fleets.

Posted by Northside Ford Truck Sales at 3:57 AM No comments:

The new 2013 Ford F-150 has the best combination of towing and fuel economy.

Posted by Northside Ford Truck Sales at 2:30 AM No comments:


Mike Soich of Knapheide Manufacturing shows us their partnership with the world leader in storage solutions in vehicles, Sortimo. Knapheide has designed special shelves prepunched to accomodate varied box sizes to allow for maximum storage and to match individual business needs and desires. It is a brilliant use of the space and helps people be more efficient and effective. The Sortimo boxes are available in the Knapheide KUV body, and all of Knapheide's service body products.

Find all Knapheide products at www.knapheide.com and you can see the full range of products from Sortimo at www.sortimo.com.
Posted by Northside Ford Truck Sales at 3:21 AM No comments:

Harbor offers the 2 and 3 piece Cargo Bed Enclosures and two
choices for access to the enclosed cargo bed area. 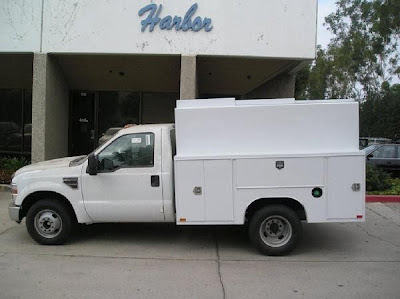 Cargo Bed Enclosures are very popular options that help keep cargo in the bed area out of sight and secure. They are available in 2-piece for 8' and 9' bodies and that opens up approximately 50% of the bed area when the top is pushed all the way rearward and the 3-piece for the 8' and larger bodies that opens up approximately 66% of the bed area. The 3-piece Enclosure is available as a Raised Enclosure with barn doors on the rear for the secured transport of taller items. 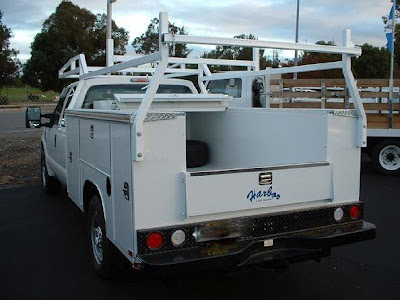 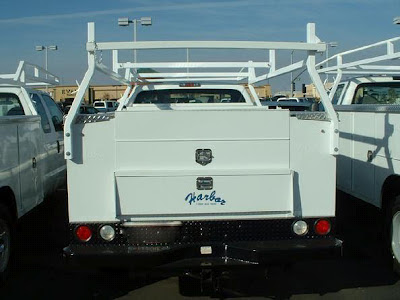 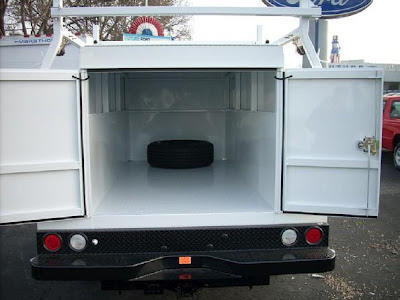 The 3 piece Enclosure choices for access are Rear Barn Doors or the Tailgate design. The choice may be governed by the load when loading or unloading normal cargo such as equipment or tools. For example, heavy loads may be set into the bed area with the barn doors open and not risk damage to the tailgate. On the other hand perhaps longer loads would be better supported with an open
tailgate.

Posted by Northside Ford Truck Sales at 3:25 AM No comments:

Developed under its “One Ford” global product strategy in Europe, the Ford Transit and Ford Transit Connect models will be sold in Europe, North America and other worldwide markets, with product ranges tailored to the needs of customers in each region.

The introduction of the new generation Transit and Transit Connect models is a major step in Ford’s commitment to completely redesign its entire commercial vehicle line-up for Europe by the end of 2013.

Using the latest global platforms, the two models highlight Ford’s new approach to delivering the next generation of class-leading commercial vehicles to meet the needs of customers in all worldwide markets.

The new range builds on almost 50 years of experience in creating market-leading commercial vans and was engineered at Ford’s Centre of Excellence for commercial vehicles in Europe;  applying global product development resources.

Offering a comprehensive range of body styles and derivatives, with multiple wheelbases, roof heights and new chassis cowl versions, all-new and more capable Transit is tailored to the needs of key worldwide markets.

For Europe, a full range of Transit bodystyles and derivatives, offering front-wheel drive, rear-wheel drive and all-wheel drive, will be powered by the latest 2.2-litre Duratorq TDCi diesel.

In North America, customers can choose between two gasoline engines – the proven 3.5-litre EcoBoost V6 and an additional V6 unit – or a powerful diesel option; each features rear-wheel drive.

Multiple roof heights are available, including a unique low roof version, plus multiple wheelbase derivatives and a selection of regular and heavy-duty chassis cabs. North American Transit vans will be manufactured in Kansas City, alongside the Ford F-150.

The stylish all-new Ford Transit Connect will deliver new standards for the sub-one-tonne segment for load-carrying ability, cost of ownership and dependability.

Available in a choice of short and long wheelbase versions, the new Transit Connect will offer European and North American customers the most flexible and functional loadbox in the segment, with a host of innovative features to enhance everyday productivity.

Transit Connect features the latest low-CO2 powertrain technologies to deliver best-in-class fuel economy in all of its target markets. In Europe, the engine line-up will include highly-efficient downsized diesel and petrol engines, while the U.S. market will benefit from a tailored range of gasoline powertrains.

The new model has a stylish cockpit with car-like design and craftsmanship, and offers the latest Ford interior technologies and driver assistance features.

The Ford Transit brand has established a legendary reputation for toughness and dependability, and the new global Transit products have been engineered to extend that tradition. Both the all-new
Transit and all-new Transit Connect have been subjected to Ford’s ultra-stringent commercial vehicle testing and durability standards, covering millions of miles of arduous testing in laboratories, at proving grounds and on customer fleets.

“Our new global Ford Transit products will be totally fit for purpose,” said Nair. “These are the strongest, most capable and most efficient commercial vans we have ever built – this is the start of a new chapter in the Transit success story.”

The two new global models join the Transit Custom in Ford’s renewed commercial vehicle line-up for Europe. Targeting the one-tonne market, the all-new Transit Custom is now on sale across European markets. It will not be introduced in North America but will be launched in other selected other global markets later.