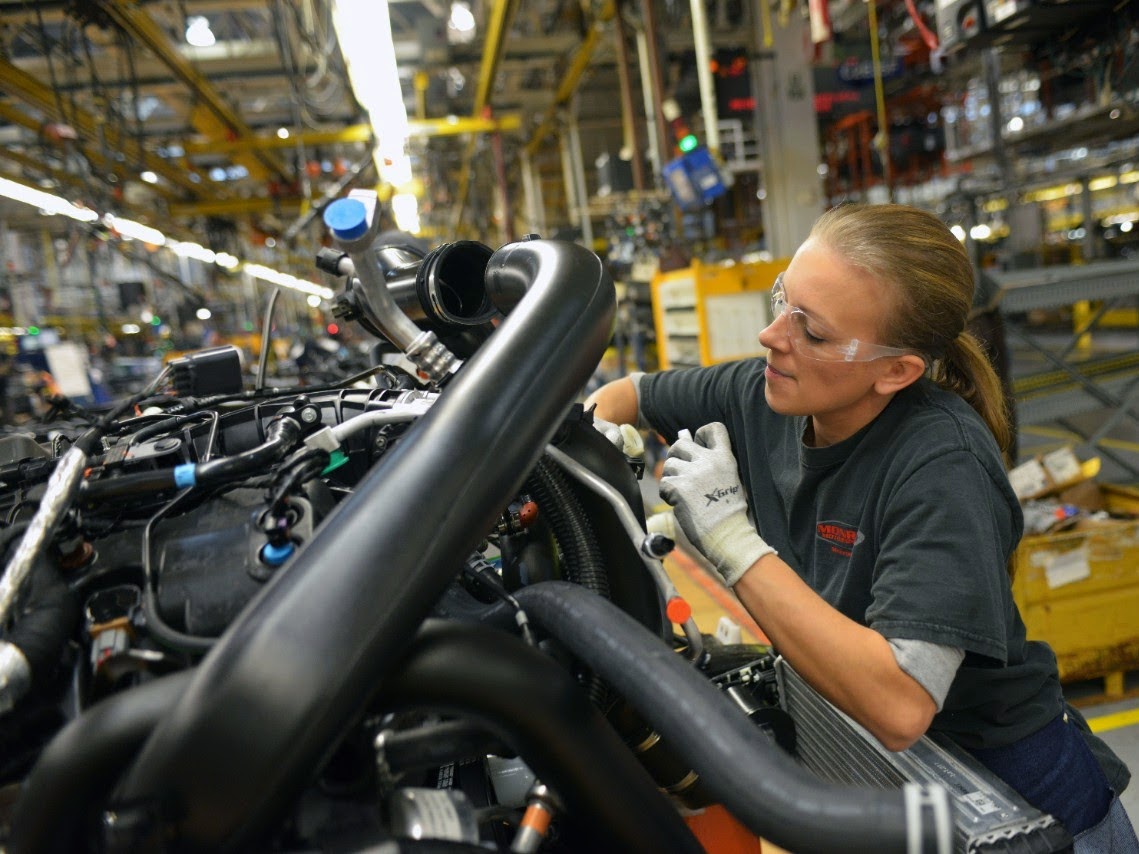 As Ford ramps up production of the all-new F-150, the company today announced it will add 1,550 new jobs across its Kansas City Assembly, Dearborn Stamping, Dearborn Diversified and Sterling Axle facilities in the first quarter of 2015. The new jobs will support production and growing customer demand for the recently launched 2015 Ford F-150.


With these new jobs, Ford has reached its entry-level allowance outlined in the 2011 UAW-Ford collective bargaining agreement. As a result, approximately 300 to 500 workers – the first group of “new traditional” employees – will transition, based on attrition and growth, from their entry-level wage of $19.28 an hour to their new wage of $28.50 an hour. The majority of these employees work at Kansas City, Chicago and Louisville assembly facilities.


“Thanks to stronger than expected customer demand, we’re adding 1,550 new workers to support additional F-150 production,” said Joe Hinrichs, Ford president, The Americas. “These jobs are further proof that customers recognize the all-new F-150 as the toughest, smartest, most capable F-150 ever. We sell every truck we can build, and we plan to build more.”


Of the 1,550 new jobs, 900 are allocated for Kansas City Assembly and 500 will be added between Dearborn Stamping and Dearborn Diversified, with the remaining 150 jobs going to Sterling Axle. These jobs are in addition to the more than 5,000 hourly jobs Ford added across its U.S. manufacturing facilities in 2014.


“This is very exciting news and these additional jobs will have an impact in communities all across our nation,” said Jimmy Settles, UAW vice president and director, National Ford Department. “This also represents a major milestone for employees hired under the entry level agreement, as many will now begin to convert to ‘new traditional’ wage status, as negotiated in the 2011 collective bargaining agreement.”


The entry-level agreement negotiated as part of UAW-Ford collective bargaining has helped improve Ford’s competitiveness and enabled the company to invest more than $6.2 billion in its U.S. manufacturing facilities. Ford has hired more than 15,000 hourly UAW members – exceeding its goal of creating 12,000 hourly jobs in the United States by 2015.


Toughest, smartest, most capable F-150 ever

The all-new F-150 is the toughest, smartest and most capable F-150 ever – boasting a military-grade, aluminum-alloy body and high-strength steel frame, and shedding up to 700 pounds for a lighter, more efficient truck than any previous F-150.


These weight savings lead to customer benefits regardless of model configuration or engine choice. The innovative new truck can tow up to 1,100 more pounds and haul up to 530 more pounds than the 2014 model, and has the highest EPA-estimated fuel economy ratings of any full-size gasoline pickup on the market. When equipped with an available 2.7-liter EcoBoost® engine, the new F-150 4x2 has EPA-estimated fuel economy ratings of 19 mpg city, 26 mpg highway and 22 mpg combined. Actual mileage may vary.


Numerous groundbreaking features debuted in the all-new F-150, including these class-exclusives:

To manufacture the all-new Ford F-150, the truck team designed an innovative process that includes the latest in advanced materials and in forming and joining technologies.


Combined, the two plants will have capacity to produce more than 700,000 trucks per year for availability in 90 markets globally.


The all-new F-150 is off to a tremendous start. In January, Ford F-Series had its strongest sales month since 2004, which was the company’s best sales year for the F-150 ever. In the first month of 2015, F-150 sat just 12 days on dealer lots – turning faster than any other Ford vehicle. In addition, more than 1 million people have built and priced F-150 configurations on Ford’s website.
Posted by Northside Ford Truck Sales at 5:21 AM