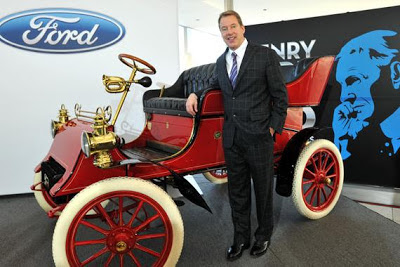 Please visit the Henry Ford 150th mini-site for more information about this event as well as others throughout 2013.

SIDEBAR: Model A Helped Launch Ford Motor Company on the Road to Putting the World on Wheels

DEARBORN, Mich., Dec. 11, 2012 – A key part of Ford Motor Company’s heritage returns home as a Model A built in 1903 is again with the Ford family, kicking off the yearlong celebration of the 150th anniversary of the birth of company founder Henry Ford.

Considered the oldest surviving Ford vehicle, the 1903 Model A was unveiled today to Ford Motor Company employees by Executive Chairman Bill Ford, who purchased the vehicle at an auction in October.

“The timing was perfect to bring this key part of Ford heritage back to the family as we celebrate the 150th anniversary of my great-grandfather’s birth and his vision to improve people’s lives by making cars affordable for the average family,” said Bill Ford. “His vision to build cars that are reasonably priced, reliable and efficient still resonates and defines our vision today as well.”

A dedicated website, www.henryford150.com, also is launching today that includes an interactive timeline of Ford’s life, tours, a calendar of 2013 events and information about efforts to preserve Henry Ford’s heritage.

Henry Ford’s 150th legacy will be celebrated in 2013 through a variety of events. Some of these include:
The role of the Model A
The Model A returning home played a pivotal role in Ford Motor Company history.

The car revealed today is a red 1903 Model A Rear Entry Tonneau. It is believed to be car No. 3, chassis No. 30, and the lone survivor of the group of three Model A cars sold on that day.

The vehicle was auctioned through RM Auctions in October in Hershey, Pa.

“The Model A helped keep our company going during a difficult time and enabled my great-grandfather to continue pursuing his vision of putting the world on wheels,” said Bill Ford. “We look forward to carrying that same spirit of innovation forward as we develop new technologies for safer, cleaner, more fuel-efficient vehicles.”

For additional information, go to http://media.ford.com/mini_sites/10031/HenryFord150.
Posted by Northside Ford Truck Sales at 3:00 AM