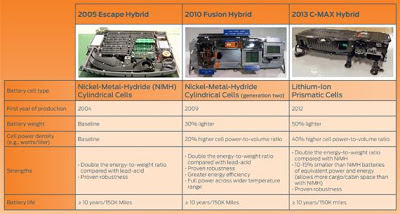 DEARBORN, Mich., Dec. 12, 2012 – Ford is putting the equivalent of 10 years and 150,000 miles of wear and tear on hybrid vehicle batteries using a new lab test that takes less than a year to complete.

The test allows engineers to simulate in a lab setting many factors, including location of a battery within a vehicle, the temperatures they might have to endure, and various kinds of acceleration and stopping that different drivers would apply. The scope of the testing also includes the ability to put 150,000 miles (the equivalent of about 10 years of average use) on the test batteries in about 10 months.

In fact, battery reliability ranks as the single-most important purchase consideration by potential hybrid customers – topping 17 other factors such as fuel economy and number of safety features, according to a recent Ford-commissioned survey.

“Recent studies show consumers are keeping their vehicles longer, and regulations in some regions now require batteries to carry warranties for greater distances,” said Layden. “Fortunately, our tests take into account distances and conditions that go way beyond those normal requirements.”

Ford will offer five electrified vehicles by 2013 – all equipped with advanced li-ion batteries. Previous-generation vehicles from Ford’s lineup featured nickel-metal-hydride (NiMH) batteries. Li-ion batteries offer numerous benefits – including a size 25 to 30 percent smaller, and the ability to provide about three times the amount of power per cell than the previous state-of-the-art NiMH battery technology.

Ford’s experience with hybrid vehicle technology dates back to the late 1980s. The technology evolved quickly, resulting in limited release of the Ranger EV in 1998, the Escape Hybrid in 2004 and the Fusion Hybrid in 2009. Ford draws on these vast amounts of data it collected from previous-generation hybrids.

For example, 50 million battery cells have been produced since 2004 in previous-generation production Ford hybrid vehicles such as the Escape Hybrid and Fusion Hybrid.

Some of these have been put to use in taxi fleets in such cities as San Francisco and New York, with some taxi vehicles attaining more than 250,000 miles individually and taxi fleets in California alone attaining a total of nearly 100 million miles.

The success rate is stellar: Of all Ford production hybrid vehicles produced to date, only six battery cells have failed of the 50 million that were put into use.

“We can’t do an apples-to-apples comparison between the nickel-metal-hydride and lithium-ion batteries,” says Mazen Hammoud, chief engineer, Electrified Powertrain Systems. “But we can evaluate much of the data collected to see how hybrid vehicles are driven, the kinds of conditions they face and the demands that are placed on them. Knowing all of that helps us benchmark our tests and ensure the lithium-ion batteries are meeting or exceeding expectations.”

Ford is investing $135 million in the design, engineering and production of key components – including doubling its battery testing capabilities – for the five electrified vehicles the company will have in its portfolio by the end of the year: Fusion Hybrid, Fusion Energi plug-in hybrid, C-MAX Hybrid, C-MAX Energi plug-in hybrid and Focus Electric.

Ford also now has more than 1,000 engineers working on vehicle electrification, which is headquartered at its 285,000-square-foot Advanced Electrification Center in Dearborn.

The investment in people and infrastructure is already paying off: Ford has reduced the cost of its current hybrid system by 30 percent compared with previous-generation technology and vehicles are coming to market 25 percent faster.