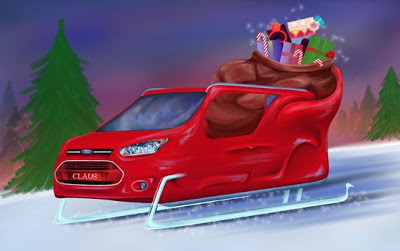 DEARBORN, Mich., Dec. 21, 2012 – Ford is helping Santa Claus save future Christmases with an all-new 2014 Transit Connect Wagon sleigh. Due to larger-than-ever numbers of children on his “nice” list, Claus needed a new sleigh with maximum fuel economy and cargo space to efficiently deliver all his presents around the world.

Ford designed a concept sleigh for Claus based on its Transit Connect Wagon, powered by EcoBoost®, that offers 30 mpg-plus and an industry-leading presents per gallon (ppg) cargo rating. As an added benefit, the EcoBoost engine – which is finely tuned for high-speed performance – would offer speeds much faster than Claus ever traveled in his former 36-hoofpowered sleigh.

Claus says changing his mode of transportation will not compromise his ability to remain true to his mission.

“My goal is and always has been giving presents to good girls and boys, and a new sleigh will make that process more effective,” he says. “Let’s face it, every year there are more children who earn presents. Things are simply getting out of control, and my old sleigh just isn’t going to be able to hack it much longer. With the new sleigh, I will be able to travel faster and carry more toys.”

“This is a winning situation for all,” says Darren Goddard, chief engineer for Ford Transit Connect Wagon. “The increased efficiency means added time for Santa to enjoy milk and cookies at stops. His new ride will offer 100 cubic feet of cargo space and versatility to haul up to 2,000 pounds, which Santa will need.”

Reindeer spokesperson Dasher says the nine reindeer look forward to some time off. Every year, the flying animals travel 124,421,726 miles and they’d like some time to rest, he says, explaining there are still splinters embedded in his hoofs from a particular wooden roof in southern Indiana.

“You really can’t beat this new sleigh,” says Goddard. “It offers outstanding fuel economy without sacrificing power. It even offers an electric windshield defroster, making short work of icy windshields in wintry conditions. So, if there’s a foggy Christmas Eve, we won’t need a red-nosed reindeer to guide Santa around the world.”

Other reasons Claus chose a sleigh based on the all-new 2014 Transit Connect Wagon:

“As always, we are busy making toys and checking long lists,” says Claus. “That said, Merry Christmas to all!”