Exploring the Texas King Ranch in a Ford King Ranch 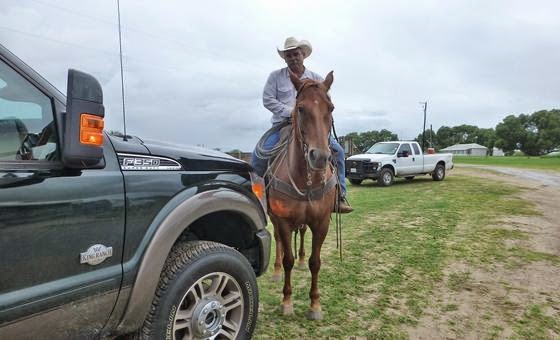 Ford developed its first special-edition King Ranch pickup for the 2001 model year, and today, more than a decade later, its offspring include three luxury versions: an F-150 pickup, an F-Series Super Duty truck, and an Expedition SUV.

The King Ranch brand has been appealing to Ford buyers, and its heritage is similar to the actual family-run King Ranch, which is located in Kingsville, Texas, and which is known as the birthplace of the American ranching industry. The ranch is one of the oldest family corporations in the U.S., and is nearly the size of Rhode Island, a massive 825,000 acres of land that sprawls across six Texas counties. It comprises nearly 1,300 square miles in south Texas, several turf grass farms there, and has significant agriculture holdings in Florida.
The History

The Ranch dates to the middle of the 19th century, when Captain King was captivated by a region known as the Wild Horse Desert. King and his wife Henrietta developed the Ranch, regarded by many as the birthplace of some of the finest quarter horses in America.

Because Ford's design team used the King Ranch to "reinvigorate" and authenticate the update to the 2015 Ford F-Series Super Duty King Ranch edition, we drove the 2015 Ford F-350 King Ranch with the PowerStroke diesel engine to take a look at how the Ranch uses a fleet of more than 250 Ford pickups every day.

What drew Ford designers to the ranch for inspiration? "What really stood out is how prominent the 'Running W' is, and how it defines and unifies the ranch," said Barb Whalen, Ford color and material design manager. "Similarly, we wanted that brand to define the new Super Duty King Ranch." The Running W is actually the brand burned into cattle on the ranch.

On the new Super Duty King Ranch, that Running W is the focal point for the interior. It has been cut and stitched to make the seat backs and center console appear branded. What's new is a lighter, richer shade of Mesa leather that trims the seats, center console lid, armrests and steering wheel. The exterior has darker Caribou paint for the wheel lip moldings, bumpers and lower body, while the bed rail caps, bumper caps and running boards are trimmed in black, with Running W wheel caps.

Texas is a focal point for Ford, because more pickups are sold in Texas than any other state; in fact, it's the top truck market in the world. Not surprisingly, Texas is the top-selling market for Ford's F-Series trucks and its Expedition SUV, and the King Ranch is one of the top trims on the F-150, Super Duty trucks and the Expedition. Ford frequently conducts market research in Texas that helps shape future products.
The Ranch

Arriving at the ranch for our two-day visit, we learned that all the trucks and buses used by the Ranch are Ford King Ranch vehicles. "We depend very heavily on the durability and reliability of Ford vehicles," explained Dave DeLaney, the current VP and GM of the South Texas ranches. "This is very rugged country and we need trucks that can last."

King Ranch Chairman Jamey Clement agreed. "To us, there are so many similarities with Ford. We have the same value: taking care of people," explained the King family descendant. "What it's about is relationships and the more we understand each other, the more we get in a truck and it feels like 'us.' It's a way of life, and people want to be part of the winning team and want to experience it," he said. "What is the King Ranch 'family brand'? It's all interrelated; if you listen to our people talk, they say 'my truck, my cattle.'"

Finding the right partner is difficult, said Doug Scott, Ford Truck Group Marketing Manager. "We have a very select group of partners and the King Ranch is one of the few," Scott said. "It has to work right for us … with the idea of retailing and how it works for Ford dealers on the show room floor. One of the key tenets for us is brand authenticity and picking the right partners."
The Ride

How did the second-generation turbo-diesel 6.7-liter Powerstroke V8 Super Duty F-350 drive? We clocked from 14 to nearly 18 mpg on our highway drives, but we faced strong headwinds as we motored from Austin to the ranch, which borders the Gulf Coast. As we returned, we encountered heavy downpours, both of which took a nip out of the truck's fuel economy. Our luxury-laden Crew Cab model is a true boulevard-cruiser, with Clydesdale-like horsepower (440) and torque (860 pound-feet) and a host of electronic features like Bluetooth, navigation and the newly included MyFord Touch and Sync systems.

What did we like best? The quietness of the interior, which has a plentiful array of nooks and cubbies for stowage, and the pickup's ergonomics. My driving partner and I are both height-challenged drivers and used the running boards to aid with getting in and out, we liked the adjustable pedals and height-adjustable seatbelts, as well as the overall ergonomics that provided good visibility and comfort in the leather-appointed Captain's Chairs. We came to the conclusion, after our time behind the wheel, that Captain King would have approved.

For more information about the 2015 Super Duty F-350 King Ranch Crew Cab, you can read about our first experience with the truck earlier this year. 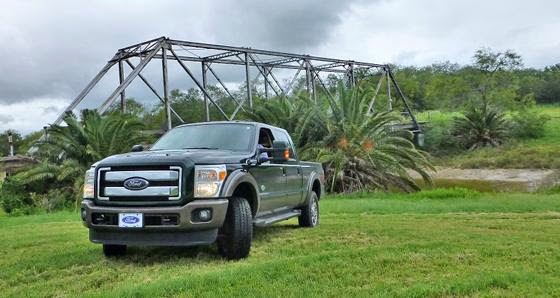 (Editor's note: Official Texas State Photographer, Wyman Meinzer, captured the spirit of Ford's long-standing partnership with the King Ranch in a series of photos of trucks at the Ranch. Those images can be found at: www.wymanmeinzer.com.)

Posted by Northside Ford Truck Sales at 6:00 AM