At the recent launch of the all-important 2015 Ford F-150, longtime Ford marketing leader Dave Scott told James Healey of USA Today that Ford was giving serious consideration to the idea that the U.S. market could support a smaller entry-level pickup. But it would have to meet some specific criteria. 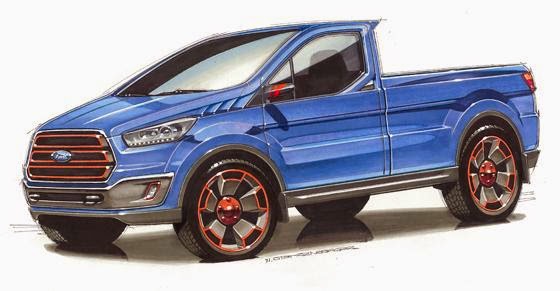 According to USA Today, Scott noted that it would likely have to be a compact pickup, smaller in size than the recently debuted full-frame Chevrolet Colorado and GMC Canyon midsize pickups, and may even be better served on a unibody platform. In order to succeed, the truck would also have to offer as much as 25 percent better fuel economy than the full-size pickups and cost $5,000 to $6,000 less than a base-model half-ton.

According to USA Today, Scott did note that Ford has many vehicles that could potentially work but did not name them, although he did say that the global Ford Ranger — a popular midsize pickup around the world — would not be a good choice because it sits too close in size and capability to the current half-ton product.

From our standpoint, and from the description Scott provided, it looks like Ford is considering a modified version based off the current Transit Connect or Transit, or possibly both. Either could provide a solid, capable unibody platform for a new-style Ranchero or F-100 pickup truck. And it wouldn't surprise us if we saw something (maybe a concept at one of next year's auto shows?) not long after dealerships have gotten comfortable with the all-new 2015 F-150. We have no doubt that if the response to the GM midsize pickups and the redesigned 2014 Toyota Tacoma (as well as the new Honda Ridgeline coming in 2016) brings more people into the smaller truck segment, Ford will be ready to pull the trigger on a new type of downsized pickup.

by Mark Williams
pickuptrucks.com
Illustration by Mark Stehrenberger
Posted by Northside Ford Truck Sales at 3:34 AM