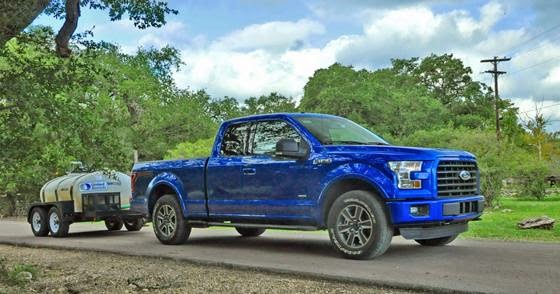 The recent Texas Auto Writers Association's Truck Rodeo provided our first chance to do some comparison towing with a couple new 2015 pickup trucks. We hauled loads with a 2015 Ford F-150 equipped with the all-new 2.7-liter V-6 EcoBoost as well as an all-new 2015 Chevrolet Colorado with the 3.6-liter V-6. We didn't get to do any instrumented testing, but we thought you might be interested in our observations.

To its credit, TAWA allows its members to do some towing with select manufacturers' vehicles that are part of the rodeo. We can't think of any other automotive writers' association that does this. This year TAWA provided four identically equipped 500-gallon water-tank trailers — outfitted with a conventional surge-brake hitch — to put behind each of the designated vehicles. Although we didn't see an exact weight for the trailer, we calculated the total weight of water and double-axle reinforced supports to be just more than 5,200 pounds. Based on our best guess, the total weight of the trailer was nearly the same as the F-150 and probably several hundred pounds heavier than the Colorado. All trailers and hitches were well balanced and height adjusted, so there was no excessive tongue weight.

The Ram for this tow event was a well-equipped EcoDiesel; the Toyota Tundra was a fully loaded 1794 Edition; the Ford was a midlevel XLT FX4 package; and Chevrolet, interestingly, offered its Silverado 2500 Heavy-Duty Duramax and Colorado crew-cab V-6. As you might expect, the big and small diesels (the Ram EcoDiesel and the Chevy Duramax) made short work of the stubby trailer, with the Duramax significantly under-stressed during the drive loop. Likewise, the Tundra's V-8 had no trouble moving the load around comfortably and feeling quite stable (but we can't believe Toyota doesn't offer an integrated trailer brake controller yet).

The big news was getting the chance to tow with the all-new, high-tech 2.7-liter EcoBoost engine, something we weren't able to do at the 2015 F-150's recent introduction. The bottom line is that the engine seems powerful enough to pull a 5,000-pound load wherever needed, but maybe more importantly is how calm and settled the chassis feels when pulling and hauling the weight. From hill stops and takeoffs on a fairly good grade, the truck handled smoothly and settled any road irregularities pretty quickly. In comparison, the Colorado, since it's a smaller and lighter vehicle with a naturally aspirated gas engine, struggled a little bit more. Still, the engine and midsize platform did have the grunt and pulling power to move the load on our drive route. We did find ourselves more aware of the weight and how the trailer could push us around if we weren't careful when going off-throttle into and out of curves and corners.

Our drive route was pretty short, but we did manage to collect some unscientific numbers. While driving the F-150 we averaged just more than 11 mpg, while the same route in the Colorado got us just less than 9 mpg. We're fairly certain the F-150 was equipped with 3.55:1 gears, while the Colorado only comes with 3.42:1 gears. There's not doubt the Chevy would have handled the load better with a 3.73:1 gear, as would the Ford — yet it wasn't necessary.

The F-150's new EcoBoost engine automatically turns off the auto stop-start feature and does a great job in Tow/Haul mode, slowing down the truck and trailer with an aggressive software program that makes quick downshifts when slowing or braking. The Colorado, dealing with a higher percentage of its maximum towing capacity (about 61 percent for the F-150 and about 74 percent for the Colorado), seemed to accelerate slower but had the very comforting ability to quickly downshift with just a tap of the brake pedal or manual thumb shift (the Ford also had this grade-braking feature, but it didn't seem to react as quickly and tended to rev the engine at a higher rpm).

Based on these preliminary quick drives, both pickups seem able to do plenty of hard pulling, but the Ford (with the smaller engine) seemed to handle the load with a touch more confidence. The Chevy V-6 was only down 20 horsepower when comparing the two engines, but when towing, the torque numbers always tell the tale. The Ford EcoBoost produces 375 pounds-feet while the GM V-6 gets 269, almost a 40 percent difference. Still, for a downsized player, a 5,000-plus trailer is likely to be a 99th percentile activity for this truck; even so, it's nice to know it will do it with control.