One of the Largest Collections of Pre-war Ford Vehicles 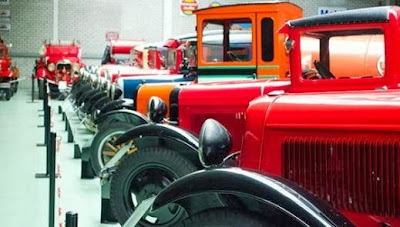 When you travel to Holland as a tourist, you expect to see tulips and windmills. You probably wouldn’t expect to see one of the largest collections of pre-war Ford vehicles. But, on a recent trip to Amsterdam, we ventured southwest to Hillegom, Holland, and that’s exactly what we found at den Hartogh Ford Museum.

What started as a fleet of work trucks for the den Hartogh company at the turn of the last century grew into a fantastic collection of early Ford cars and trucks. Do you have a classic Ford vehicle? Tell us your story!

Once we overcame the awe of stepping into the first room in the museum holding dozens of Model A, N, T and other model Ford cars, we dove deeper into each vehicle to enjoy the mechanical history spread before us.

From there, we made our way down a row of Model T cars, each a variation of the one beside it, with various mechanical and cosmetic options originally offered. One of the vehicles that captured our attention in the first hall was a 1930 Ford Phaeton that was used as a taxi in Egypt until 1995!

Another one that stood out was a Ford Model A pickup truck that featured triple rear axles with a track drive, and skis under the front axle. The perfect vehicle for making deliveries in northern, snow-laden regions!

Any one of these vehicles by themselves would be nice to spend some time admiring. This collection, spanning 50 years of early Ford history, was simply incredible.  If you find yourself in the land of tulips, take a detour to experience this world-class collection of Ford cars and trucks at den Hartogh Ford Museum.
Posted by Northside Ford Truck Sales at 9:30 AM