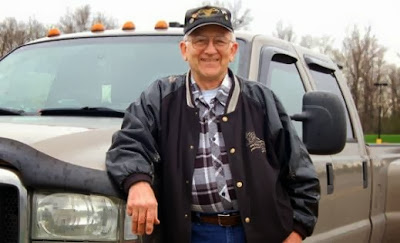 You know how everyone thinks their baby is the cutest on the planet? Truth be told, there are many of us who feel the same way about our vehicle. Okay, it’s probably more about believing ours is the best, thanks to reliability, performance, comfort and being fun to drive. But in some instances there is indeed a cuteness factor (hey, we’ve heard it from Focus owners with our own ears!), but we’ll go with the more user-friendly, looks matter too.

Therefore, it’s hard to argue with Gary Mueller when he says, “I don’t think I could be happier with a truck” when he speaks proudly of his baby, a 2002 Ford F-350 Super Duty®. The pickup has more than 1,020,000 miles on the odometer, and Gary has no plans to stop packing on the miles while towing RV campers throughout the U.S. and Canada. And why would he even consider it? The truck keeps going and going and going and….

But let’s journey back a few hundred thousand miles.
Gary retired from Ford in 2000, and in the six years leading up to it, he worked overtime as much as possible because he wanted to travel North America and invested the money in stocks to earn more on his savings. Then the market crashed and Gary lost 70 percent of what he calls “fun money.” The dream seemed dead. But a friend was seeing the country on the cheap by towing large RVs and delivering them to buyers. Gary tagged along as a passenger, then signed on for the gig himself, buying a new truck – that aforementioned Super Duty.

Gary says the Super Duty gets about 20 mpg with its Power Stroke® engine while delivering the RVs, and “as long as I can keep getting 20 mpg, I’ll keep hauling. That’s the only way it makes economic sense,” since he is responsible for most of his expenses. He says his driving habits also contribute to the outstanding gas mileage; he avoids fast starts and stops. If weather conditions create too much drag, he parks it. He keeps the rpm near 2,000 whenever possible while generally staying between 60 and 62 mph. “I will see the same people pass me two or three times a day. They’re going 70 or 80 mph, and have to keep stopping for fuel.” He also maintains the truck; the oil has been changed more than 100 times and the tires have been replaced 10 times.

Gary says another reason he has been able to log more than 1 million miles is because of the truck’s comfort. It has cloth seats and the XLT package, which includes power seats, windows and mirrors. “I wouldn’t have been able to put so many miles on it if I was uncomfortable.”

Even Gary acknowledges the special bond some owners have with their vehicles. “This truck isn’t just a truck; it’s an extension of me. I take care of it and it returns the favor. I see no reason at all to think about retiring it.”

Do you have a story like Gary’s? We want to hear it! Click here to go to Your Stories where you can post yours and read the other Ford stories.
Posted by Northside Ford Truck Sales at 9:30 AM