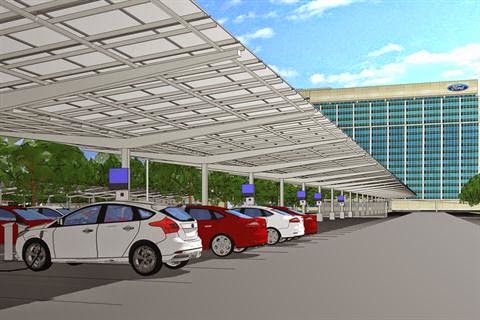 Ford Motor Co. is working with DTE Energy to build a solar carport that could provide enough energy to power more than 150 homes for a year.

The new carport at the Ford's headquarters will provide employees with 360 covered parking spaces and 30 charging stations for plug-invehicles.


DTE Energy will be funding the project that's scheduled to begin in September, and expected to be completed by early 2015, according to Ford.


The solar canopy will have the capacity to generate 1.038 megawatts of electricity. The new solar array will be the second-largest in the Midwest, following the 1.1-megawatt facility at the Cincinnati Zoo in Ohio.


The deal with Ford is a part of a DTE initiative called SolarCurrents. The program hopes to generate 10 percent of its energy from renewable sources by 2015.


From http://www.greenfleetmagazine.com
Posted by Northside Ford Truck Sales at 9:00 AM