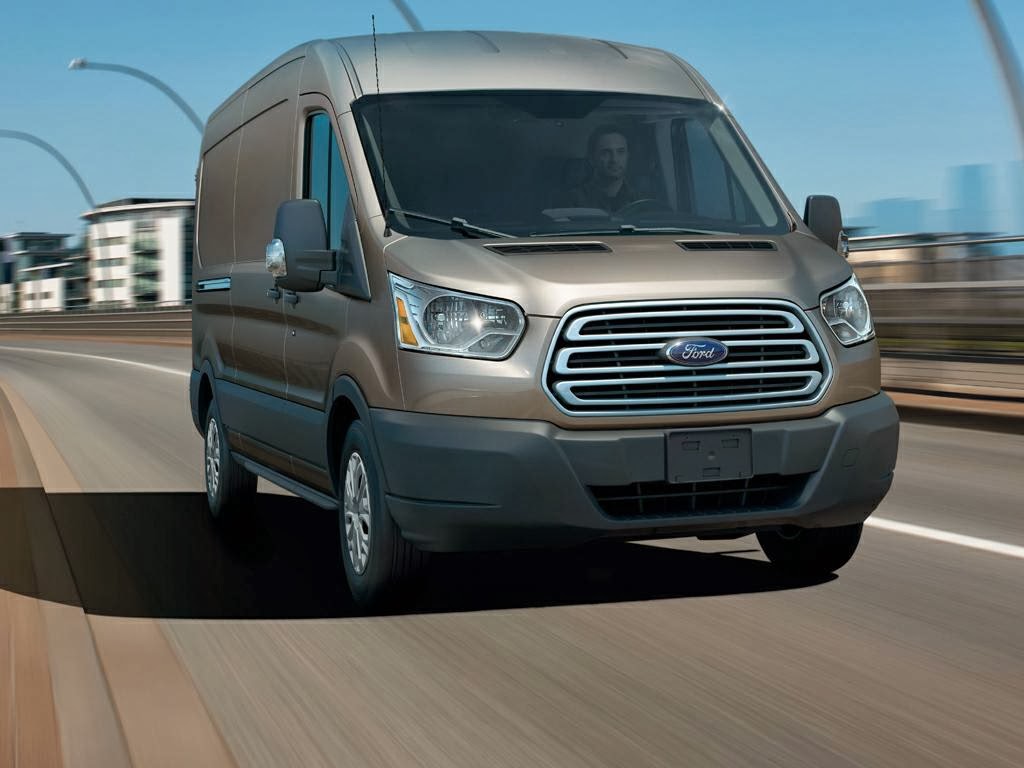 The familiar van that delivers packages or shuttles you to the airport is about to change in a revolutionary way. Ford’s all-new full-size 2015 Transit van will provide professional tradesmen and commercial fleet customers unmatched fuel economy, innovative new configurations and leading versatility in the expanding commercial vehicle market.

With global commercial vehicle sales expected to grow by 4.8 million over the next several years to 21 million units annually by 2017, Transit represents a major opportunity.

Ford, the second-largest commercial vehicle manufacturer in the world and best-selling commercial vehicle brand in North America, is leveraging its One Ford product strategy to meet the needs of Transit customers on six different continents and in 116 markets with vans that are Built Ford Tough, more fuel efficient and even more capable.

Transit joins the most fuel-efficient lineup in Ford Motor Company’s history. This year Ford is offering seven vehicles rated at 40 mpg or higher – double 2011’s total, and more than any other automaker. Ford tops Toyota in fuel economy in every segment in which both companies compete.

Transit is born from a combined total of nearly a century of hard-earned experience delivering two distinct full-size vans to customers in North America, Europe and other global markets.

Transit also is joined by the upgraded 2014 Ford Transit Connect, which pioneered the small van market in the United States and has been a hit with cost-conscious commercial fleets and small business proprietors.

For maximum capability, the 3.5-liter EcoBoost® promises to be a trusted workhorse, whether carrying materials to the job site or towing a trailer with Transit’s available Class IV hitch.

Each engine is paired with a six-speed automatic transmission for efficient rear-wheel-drive operation.

Biggest range ever
For Transit, power of choice goes beyond powertrain options to encompass multiple lengths and roof heights to provide full-size van buyers with the precise combination and configuration they require.

The high-roof Transit features 81 inches of interior cargo height, enough headroom for a person standing six foot, five inches tall to stand upright in the cargo area. The medium roof can accommodate up to 72 inches of cargo height and the low roof has 56 inches of cargo height to provide an ideal combination of payload management, upfit readiness and garageability. Cargo volume ranges from 256 cubic feet to more than 550 cubic feet – nearly 75 percent more space than a Chevrolet Express.

The interior of each Transit van features advanced, durable LED lighting and has been developed for easy upfit of racks, bins, shelving and other cargo storage and hauling solutions. The largest passenger version can carry up to 15 people.

Transit is available with a wide variety of comfort and convenience options. A 6.5-inch touch-screen display with navigation and SYNC® with MyFord Touch® – Ford’s highly acclaimed voice-activated communications and entertainment system – is also available.

Transit has been developed to be efficient to service and maintain, with specialized technical service support and extended operating hours available at more than 600 Ford Business Preferred Network dealers.

Designed and developed to provide efficient service over the long haul, Ford Transit scheduled maintenance costs for a three-year usage cycle are projected to be more than 30 percent less than a Chevrolet Express 1500 with the standard 4.3-liter V6, helping give Transit the segment’s lowest cost of ownership per cubic foot or pounds of cargo transported.

Built Ford Tough
The all-new Ford Transit has been engineered to deliver a severe-usage service life of 10 years and 150,000 miles. Transit features rugged unibody construction and extensive application of high-strength and boron steel that has been tested to the same standards as E-Series vans at Ford’s proving grounds and in the hands of real-world fleet customers in North America.

A durability program to deliver on Built Ford Tough customer requirements included 148 prototype vehicles, with a regimen of 215 separate tests to validate the long-haul functionality of various vehicle systems and hardware.

The 2015 Ford Transit will be built at the recently upgraded Kansas City manufacturing facility.
Posted by Northside Ford Truck Sales at 9:00 AM