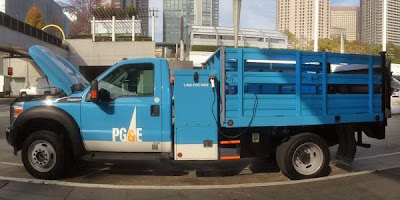 The West Coast Utility’s Fundamental Goal Is to Reduce Its Fuel Use. The Ford F-550 modified for plug-in hybrid electric operation for PG&E by EVI,  Electric Vehicles International,Stockton, Calif.

PG&E showed the vehicles at an event preceding the San Francisco International Auto Show, which opened on Thanksgiving Day. The first of the Ford F-550-based EVI F-550 plug-ins will have 50 kilowatts of exportable power, to be boosted to 120 kilowatts, EVI said.