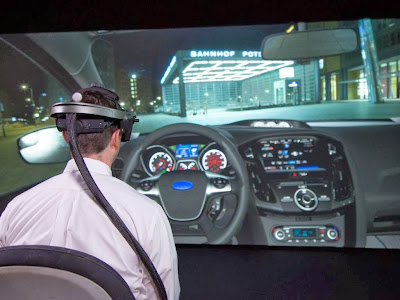 Ford is the first automaker to use a new ultrahigh-definition, virtual reality lab that enables designers and engineers globally to work together on vehicles in real time

Virtual reality can be more effective than real-world design development; this year alone, Ford designers and engineers have verified more than 135,000 details on 193 virtual vehicle prototypes

Thanks to Ford’s Immersion Lab, improvements were made in both design and function to the sleek, door-mounted sideview mirrors and ultrathin LED center brake light on the new Ford Fusion; likewise, the all-new Ford Mustang benefits from improved fit and finish of its dashboard and concealed windshield wipers

Ford Motor Company engineers all over the world are creating vehicles in a new way – together, in an ultrahigh-definition, virtual reality space. Simultaneous input from designers and engineers globally is helping to improve Ford vehicle quality ahead of the prototype stage in vehicle development.

Like a Second Life game – a popular online 3D virtual world – but with ultrahigh definition, engineers and designers at Ford now experience a car the way a consumer would in a showroom. Using a totally immersive virtual space allows them to create visuals almost indistinguishable from a real car, and results in improved vehicle quality and craftsmanship.

This more dynamic, precision-oriented work environment is already delivering improvements for the customer, as seen, for example, in specific features of the new Ford Fusion and all-new Ford Mustang.

For Fusion, determining sideview mirror placement allowed for engineers to deliver optimal visibility without impacting the design of the car. The position of the sideview mirrors went through several virtual iterations before it was determined that optimal placement was a door-mounted design, which enhances visibility. Engineers also found visibility was maximized without losing style with an ultrathin LED center brake light.

This new virtual, global technology was also applied to development of the all-new Ford Mustang. After viewing the car with virtual reality technology, craftsmanship engineers were able to change the fit and finish of Mustang’s dashboard and windshield wipers so that the wipers are hidden from the driver’s view when they are at rest. Eliminating exposed fasteners allowed the engineers to create a finished look and a richer perception of quality.

Ford is the first automaker to pioneer this technology globally, allowing engineers around the world to work together on the same product at the same time.

“We now have Ford designers and engineers around the world working together virtually – inside and side-by-side – on the same product,” said Elizabeth Baron, Ford virtual reality and advanced visualization technical specialist. “By using this technology, designers and engineers can quickly transition from one car design proposal to another, and they can study and identify which is the best option.”

Updating the future, becoming global
As the company grows its global lineup of vehicles, virtual technology will be key in helping to deliver improved vehicle quality and customer experiences with new Ford vehicles. So far this year, designers and engineers have checked more than 135,000 details on 193 virtual vehicle prototypes built in the Immersion Lab – a feat that would have been impossible a few years ago.

The addition of an ultrahigh-definition “powerwall” display screen to the Immersion Lab and other Ford facilities around the world is making this technology a global reality. The screen – four times the resolution of a high-definition television – enables Ford designers and engineers to evaluate and review 3D models of vehicles in real time globally.

“We moved to the global One Ford plan so that international collaboration could lead to the development of globally appealing vehicles,” said Baron. “With this technology, designers and engineers can enhance their ability to achieve that goal – while also improving vehicle quality.”

Thanks to the upgraded facilities and new software, engineers are able to study hundreds of elements inside and outside of a vehicle. This process ensures vehicles that come to market have been painstakingly inspected for usability, consistency and design effects that are now discernible in the sophisticated shadows and real-world lighting conditions the tools provide.

X-ray vision
Ford’s Immersion Lab not only allows workers to see full-scale 3D images, it also enables engineers and designers to see inside and through a vehicle structure to study how various structural, mechanical and electrical systems interact within the architecture.

“Our new technology is more refined, and allows us to see and understand complex engineering issues while considering aesthetics and design,” said Baron. “We are incorporating light and shadow calculations in real time, which adds more depth and authenticity.”

The Immersion Lab, which began in 2006, was instituted to allow Ford designers and engineers to test various styling, craftsmanship and ergonomic options to make improvements to new vehicle design without resorting to expensive and time-intensive physical models.

Ford is the industry leader in the field of melding state-of-the-art motion capture technology, high visual fidelity and immersive virtual reality tools. Using data derived from these tools, designers can improve such attributes as outward vehicle visibility, quality and comfort.

Upgrades to the Immersion Lab include:
About Ford Motor Company

Ford Motor Company, a global automotive industry leader based in Dearborn, Mich., manufactures or distributes automobiles across six continents. With about 180,000 employees and 65 plants worldwide, the company’s automotive brands include Ford and Lincoln. The company provides financial services through Ford Motor Credit Company. For more information regarding Ford and its products worldwide, please visit corporate.ford.com.