DEARBORN, Mich., June 5, 2013 – One hundred of the nation’s best young automotive minds will converge on the Motor City to compete for the title of top high school technicians in the country at the 64th annual Ford/AAA Student Auto Skills Competition National Finals, June 9-11. With jobs in the auto industry on the rise – up more than 30 percent since last April according to the Bureau of Labor Statistics – the Ford/AAA Student Auto Skills challenge serves as a springboard for aspiring automotive technicians to launch their careers. Along with the title, millions of dollars in scholarships and prizes will be awarded as well.
This year’s young auto champions will be crowned June 11 at Ford World Headquarters in Dearborn, Mich., from a field of 48 male and two female students. The annual competition features top high school automotive technology students from all 50 states, with each state represented by a two-student team and their high school instructor. 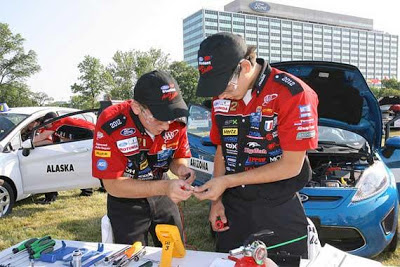 At the National Finals, the students will have their automotive skills and knowledge put to the test with a written exam and a timed event in which they race against the clock and each other to identify glitches and repair deliberately installed “bugs” in identical 2013 Ford Explorer XLT models. The team with the best combined written and hands-on score will win the national championship.
The road to Dearborn began in January, when more than 13,000 high school juniors and seniors took an online exam testing their automotive technology knowledge; it will culminate with one team taking home the title of national champion.
In addition to scholarships and prizes, this year’s two national champions and their instructor will earn a once-in-a-lifetime opportunity to gain hands-on experience through a weeklong job shadowing auto racing royalty – Wood Brothers Racing’s legendary No. 21 Motorcraft/Quick Lane Ford Fusion team and 2011 Daytona 500 winner Trevor Bayne. Leading up to and throughout the Coke Zero 400 at Daytona, this extraordinary job shadow experience extends from a high-tech performance garage in North Carolina to the world-famous Daytona International Speedway. It includes the following:
“Each week, the other drivers and I get all the attention on the track,” said Bayne. “But really, we couldn’t even get out there and run without our crew. The guys I work with are the best in the business. It’s pretty amazing what they do and how they work all week long to keep that No. 21 Motorcraft/Quick Lane car in top condition.
“The Ford/AAA Student Auto Skills Competition is a great opportunity for thousands of students across the country who really love working on cars and want to get into the industry,” he added. “I’m excited to see these national champions because this will really help them see that while they may be young, they can work on the world’s best cars themselves. And hey, who knows, I could end up seeing these students on our pit crew one day!”
Founded in 1950, Wood Brothers Racing is the oldest active team in NASCAR. The team has won 14 Sprint Cup Series races at Daytona International Speedway, more than any other team in the sport. The Wood Brothers’ most recent trip to victory lane came at the 2011 Daytona 500, when then 20-year-old Bayne became the youngest driver ever to win NASCAR’s most prestigious race.
As cars continue to become more advanced, Ford is leading the way with new technologies such as all-electric vehicles, adaptive cruise control, collision warning with brake support, hands-free entertainment and communication systems. As the mechanics who service and maintain these technologies are essential to the future of the automotive industry, the Ford/AAA Student Auto Skills challenge focuses on technological practices while educating the next generation of technicians in traditional mechanical principles.
Ford/AAA Student Auto Skills enables its participants to embark on promising careers in the automotive repair industry to help meet rising demand for well-trained technicians who can repair both computers and mechanical components in today’s advanced vehicles. Both the national and state-wide competitions are organized with the support of AAA and Ford personnel, local automotive instructors and the AAA Approved Auto Repair program, a public service AAA performs to identify quality repair facilities throughout the country. The competition awards nearly $12 million in scholarships to thousands of high school students each year, including the national title winners, allowing them to further their education in this rapidly changing industry.
# # #
About Ford/AAA Student Auto Skills
The Ford/AAA Student Auto Skills is a nationwide automotive technology competition that offers nearly $12 million in scholarships and prizes to high school juniors and seniors interested in pursuing careers as automotive service technicians. More than 13,000 students from across the U.S. compete for the chance to represent their school and state in the National Finals. The competition tests students’ automotive knowledge, workmanship and problem-solving abilities. For additional information on the competition, visit http://autoskills.aaa.com/.
About Ford Motor Company
Ford Motor Company, a global automotive industry leader based in Dearborn, Mich., manufactures or distributes automobiles across six continents. With about 175,000 employees and 65 plants worldwide, the company’s automotive brands include Ford and Lincoln. The company provides financial services through Ford Motor Credit Company. For more information regarding Ford and its products worldwide, please visit http://corporate.ford.com.
Posted by Northside Ford Truck Sales at 10:00 AM