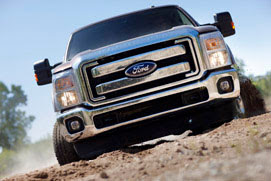 Overall, cars were up 6 percent, utilities were up 12 percent, and trucks improved 21 percent.

America’s top-selling vehicle for 30 years, the Ford F-Series pickup posted May sales of 54,836 pickups, a 29 percent increase versus last May. E-Series delivered a 31 percent increase with 14,160 vans sold.

Transit Connect had its best monthly sales performance ever with 3,937 vans sold, a 53 percent gain versus last May.

Fusion posted its best May sales ever and its strongest-ever retail sales month – with sales up 9 percent at 26,857 vehicles. Focus was up 11 percent, with its strongest sales coming from California. Mustang and Taurus increased 58 and 9 percent, respectively, with the rollout of new 2013 model products leading the way.

Utilities expanded 12 percent. Explorer delivered its best sales month since the current model hit the market in December 2010. Edge sales were up 24 percent in May versus a year ago.

During May, Ford dealers started delivering the all-new 2013 Escape to customers. The new small utility features two EcoBoost engine choices including a 1.6-liter that delivers class-leading 33 mpg on the highway.

In addition, the company delivered the first Focus Electric vehicles to retail customers.