Father’s Day Is the Perfect Time to Kick off Restoration of America’s Favorite Classic, the 1964-66 Ford Mustang 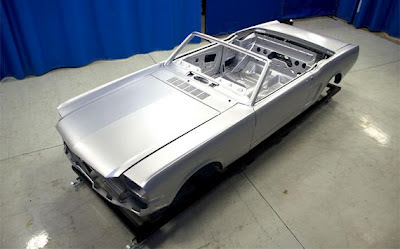 DEARBORN, Mich., June 12, 2012 – With the 50th anniversary of the Ford Mustang less than two years away, this summer is the time to begin restoring your classic pony car so that it can be ready for one of the most important milestones in American automotive history.

“Working nights and weekends, and as your budget allows, it takes roughly two years to do a complete wheels-up classic car restoration,” says Brian Martin, director of automotive restoration development at McPherson College in Kansas. McPherson is the only school in North America that offers a four-year bachelor’s degree in automobile restoration.

Martin says with careful project planning and outsourcing of some specialized jobs such as painting and transmission rebuilding, a father and son following a detailed plan can easily restore a first-generation Mustang in a good-sized home garage. What’s needed are basic hand tools, proper manuals, good mechanical skills and a realistic budget.

Restoring a classic Mustang is a great father and son project, and this Sunday, June 17, is Father’s Day – a great day to kick off a Mustang restoration with the goal of having the car ready for its 50th anniversary on April 17, 2014.

Jonathan Brand and his dad have restored three classic Mustangs in their home garage, a ’65 coupe and two ’69 models. It was an experience Brand says he will never forget.

“My dad and I weren’t as close before we restored the Mustangs,” says Brand, an artist who now lives in New Haven, Conn. “It definitely brought us closer together, all those hours working on the cars. He taught me a lot about cars, and we had a lot of fun.”

Brand’s advice: Have patience, manage the budget and use Ford-licensed restoration parts, especially for the sheet metal repairs.

“We tried using panels from junkyards, but when you consider the time it takes to get them off and then to get them to fit properly on your car, it just isn’t worth it. We found the new parts fit really well,” Brand says.

The original Mustang has long been America’s most popular classic car of the postwar era and is usually No. 1 or 2 on the list of most popular cars Hagerty Classic Car Insurance of Traverse City, Mich., insures.

Ford Motor Company aggressively supports the original Mustang with thousands of high-quality, officially licensed reproduction parts available at www.fordrestorationparts.com. These replacement parts look, fit and perform exactly as the originals. Many Ford restoration parts are actually made from the original Ford tools that have been preserved for the restoration market. About 95 percent of all the parts needed to build a “new” classic ’64 to ’66 Mustang are available today.

“We offer everything from a door handle to a complete Mustang body,” says Dennis Mondrach, Ford Restoration Parts licensing manager. “We just recently launched a 1965 Mustang convertible body – the complete assembly, all the sheet metal from the hood to the trunk. It is designed to enable fans of the original Mustang to build the classic of their dreams using a body that is stronger than the original.”

Reproduction Mustang bodies are available in every classic model year from 1965 to 1970 along with the ever-popular 1965 and 1967 convertibles. All cars feature modern welding andassembly techniques and are made from high-strength, modern automotive-grade steel. Officially licensed fenders, bumpers, door skins and other body parts for project cars that have restorable bodies are available to replace parts susceptible to rust or damaged in accidents.

Mondrach says it is nearly impossible to pluck a restorable 1964-66 Mustang or such parts as fenders, bumpers and grilles from scrapyards. Most have been wrecked, or rusted, and Mustangs with any parts good enough to be reused were long ago picked clean by restorers.

Classic Mustang restoration: Easier than you might think
Because the original Mustang uses technology that was state-of-the-art for mass-produced cars in the 1960s, the car is extremely easy to work on compared with today’s vehicles. Also, the Mustang’s mechanical components have always been easy to find and affordable, further adding to the car’s appeal among collectors. In addition, the car can easily be modified with better suspension, performance and safety options that were unavailable at the time.

Ford Racing, for example, offers many optional crate engines and performance options to meet the needs of every Mustang enthusiast.

Mondrach suggests starting a restoration with a Mustang whose body is sound and not in need of major rust, welding or accident repairs. “The costs add up quickly when you are cutting out and replacing damaged body panels. It may be more cost effective to start with a complete new body and use the engine, transmission, suspension and major trim from a donor car,” he says.

Martin, of McPherson College, recommends refurbishing the drivetrain, suspension and other mechanical components before the body and paintwork. He says a reasonable budget for a complete restoration is between $30,000 and $50,000, but that would include a new or rebuilt performance engine, transmission, rear axle, brakes, suspension, cooling and electrical systems, as well as all the trim, paint and interior parts to be as good as new.

Before starting a restoration, experts say, knowledge is the first and most important thing to attain. “Join a club. Buy the original Ford-issued repair manuals,” Martin says. “Ford service manuals from that time were really good. They were designed to speak to mechanics with a high school education, not like today’s repair manuals that assume you have an engineering degree.”

Other tips for restoring a classic Mustang