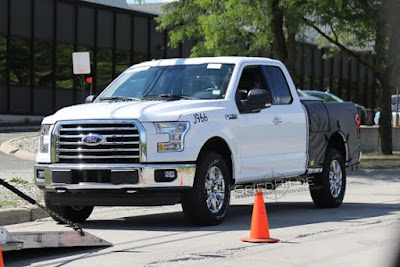 All truckmakers are pushing their powertrain engineering teams to explore and innovate multiple paths to better fuel economy in order to meet the aggressive EPA and National Highway Traffic Safety Administration fuel-economy thresholds by model-year 2025.


To meet those new light-duty truck mpg standards in just eight short years, Ford is looking to diesel and hybrid powertrains. Our spy shooters just caught a camouflaged F-150 with tagging that could mean a new baby Power Stroke diesel engine could be available as soon as the 2018 model year. Here's what they sent to us.


"Today we bring you further proof of a 2018 Ford F-150 with a turbo-diesel engine destined for sale.


“Caught earlier testing on Michigan roads, this emissions certificate on the back window of the prototype pickup indicates it is a 3.0-liter unit rather than the 3.2-liter diesel that's offered in the full-size Transit van. The JFC1-3.0-966 on the sticker is the emissions calibration code. The JFC1 is the control unit catchword; the 3.0 is the engine displacement; and the 966 is the last three digits of the vehicle tag number.


“This further confirms that Ford will be using the Lion V-6 found in current Jaguar/Land Rover vehicles such as the Range Rover. The engine was developed while Ford still owned JLR. The F-150 diesel is also identified by the venturi exhaust tip, necessary to more efficiently cool down gas temperatures.


“Ford will be gunning after the Ram 1500 EcoDiesel, which uses an Italian-sourced 3.0-liter V-6 and eight-speed automatic transmission, for the segment fuel-economy victory. Whether or not the F-150 diesel (which may or may not be called a baby Power Stroke) will debut with the face-lifted F-150 series is uncertain (see last photo below), but it should come equipped with the new 10-speed automatic jointly developed with GM and going into the 2017 F-150 and Raptor. We expect to get our first chance to drive it next year."