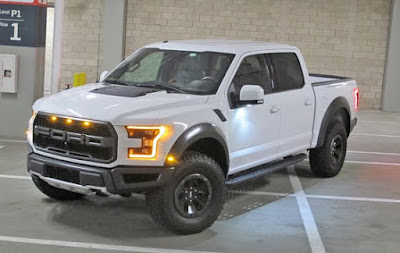 Ford has released official horsepower and torque ratings for the standard 2017 EcoBoost 3.5-liter V-6 engine that we'll see first on the upper-trim levels of model-year 2017 F-150s and will then rollout to the entire lineup. The new EcoBoost will be paired with the new 10-speed transmission as well.


This new upgraded EcoBoost engine will produce 375 horsepower and a whopping 470 pounds-feet of torque, more torque than any other half-ton — including GM's 6.2-liter V-8 — in the segment. The new engine uses a more sophisticated twin-turbo system, a new direct-injection system and includes many other efficiency-centered technologies to increase the power and cooling capabilities. Additionally, the new engine is four pounds lighter.


As if that wasn't enough, the first-ever EcoBoost-equipped Raptor (due out later this fall) will get an even more powerful 3.5-liter EcoBoost (specific ratings not officially announced yet), and be partnered with one of the most sophisticated four-wheel-drive systems available to provide a huge boost in dirt, street, and rock performance and capability.


Ford also released another video (see below) to highlight some of the Raptor's new-found capability but if the traction system works half as well in the field as it looks like on paper, we're guessing there’s plenty more performance inside this new Raptor just waiting to be released.