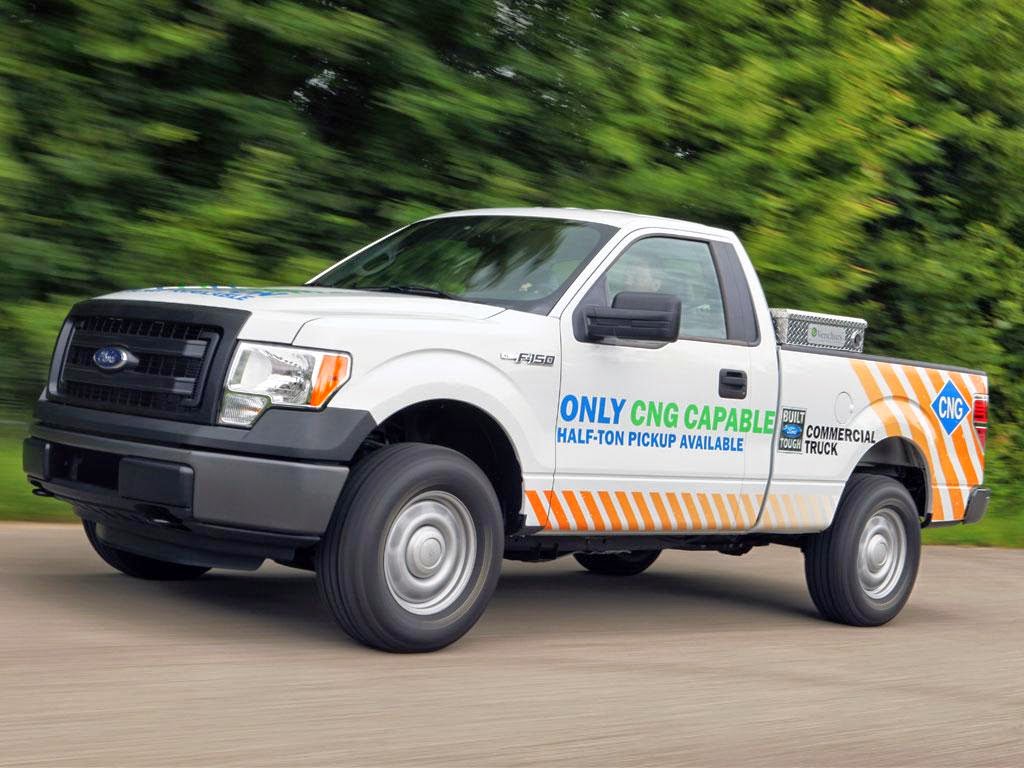 The state of Oklahoma, its agencies and the city of Dallas have ordered a total of 321 Ford F-150 pickups that can run on compressed natural gas.

Since 2010, Ford CNG-prepped truck sales have increased more than 250 percent, said Jon Coleman, Ford fleet sales manager. Cumulative sales are expected to exceed 50,000 trucks by the end of the year, and Ford expects demand for CNG-prepped vehicles to continue growing as more fleet customers recognize the economic and environmental benefits of this clean-burning fuel.

CNG-powered trucks lower costs and offer emissions benefits, and the alternative fuel is domestically produced, Coleman explained. Operating costs can be as low as one third that of conventional vehicles. Typically, the fuel savings cover the cost of conversion within three years.

“For fleet customers in Oklahoma, Texas and other states, a CNG F-150 really makes sense,” Coleman said. “The fuel is more affordable and widely available, and it reduces greenhouse gases and pollutants that cause smog.”

The 2014 F-150 is available with a gaseous-fuel prep option for the 3.7-liter V6 that can run on CNG or liquefied petroleum gas. CNG/LPG engine prep from the factory costs $315. The customer then chooses a Ford Qualified Vehicle Modifier to supply fuel tanks, fuel lines and unique fuel injectors. Upfits run approximately $6,000 to $9,500, depending on tank capacity.

For fleet managers, CNG conversions can provide stability against fluctuating fuel prices, lower vehicle operating costs and reduce pollutants. CNG sells for a national average $2.11 per gallon of gasoline equivalent, and is as low as $1 in parts of the country. By comparison, the national average for unleaded regular gas is $3.67 per gallon.

Customers can also accelerate the payback period by taking advantage of a growing number of incentives issued by states such as Oklahoma.

CNG expansion
Oklahoma Gov. Mary Fallin is leading a coalition of 22 states seeking to use more CNG vehicles in their fleets. CNG is abundant in this country and reduces America’s dependence on foreign oil. CNG also lessens the environmental impact of greenhouse gas by 20 percent and reduces smog-producing pollutants up to 90 percent.

Fallin announced the CNG project at her inaugural Governor’s Energy Conference in 2011. Since then, she has worked with other Oklahoma officials and governors from other states, met with Ford and other automobile manufacturers, and received bids to add more CNG vehicles to the state’s fleets.

“I am excited about Oklahoma’s partnership with Ford Motor Company as we work to support energy efficiency, cost savings and the use of clean-burning American-made energy,” Fallin said. “Ultimately, converting our state fleets to CNG will save millions in taxpayer dollars.”

CNG prices in Oklahoma vary from $1.07 to $2.49 per gallon of gasoline equivalent. The average statewide price for a gallon of regular gas is $3.43. Fuel bills could be reduced as much as 67 percent with CNG vehicles, Coleman said.

The specially equipped bi-fuel F-150 model purchased by Oklahoma features two storage tanks – the regular factory gasoline reservoir and a supplementary CNG tank. Combined, this gives the light-duty truck a range of up to 750 miles, depending on the size of the tanks. The most common configuration allows fleet operators to go 450 miles on CNG alone and another 300 miles on regular gas.

Most CNG options
By this summer, Ford will offer eight commercial vehicles with a gaseous-prep option, more than any other full-line manufacturer:
Power of Choice
CNG/LPG prepped vehicles are part of Ford’s commitment to offering a wide range of alternative fuel options to customers to help meet their mileage and driving needs, including EcoBoost, hybrid, plug-in hybrid, battery electric, Flex Fuel and B20 biodiesel.
About Ford Motor Company

Ford Motor Company, a global automotive industry leader based in Dearborn, Mich., manufactures or distributes automobiles across six continents. With about 183,000 employees and 65 plants worldwide, the company’s automotive brands include Ford and Lincoln. The company provides financial services through Ford Motor Credit Company. For more information regarding Ford and its products worldwide, please visit corporate.ford.com.