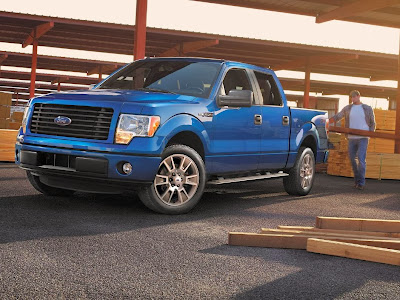 “If our truck business continues at this rate through the end of the year, we will reach 60,000 F-Series sales for eight straight months, putting us on par with 2006, before the economic downturn,” said Erich Merkle, Ford sales analyst.

F-Series continues to outpace the segment, even as key competitors have launched new products, according to Doug Scott, Ford truck group marketing manager.

“Despite new entries from our competitors, truck consumers continue to vote us No. 1 – day in and day out – with their checkbooks,” said Scott. “In 2013, F-Series had the highest owner loyalty, and we’ve won the R.L. Polk Automotive Loyalty award in the mid- and full-size pickup category 15 times in the last 17 years.”

Ford’s new F-150 STX value model is targeted at customers hit hard by the economic downturn but returning to work in the housing, energy and other markets that are seeing strong growth. STX sales quickly increased to 10 percent of all F-150 sales in 2013 from 3 percent in 2012. At the other end of the market, a segment Ford pioneered a decade ago, high-end F-Series trucks now lead with more than 50 percent share.

Western housing, tech growth
F-Series is outselling its nearest competitor by more than 65 percent in western markets, where California is experiencing rapid real estate growth and the technology industry is making Oregon and Washington two of the country’s fastest-growing states.
Central natural gas boom
In the past five years, truck sales in the upper Midwest and Plains states represent the most significant percentage growth in F-Series trucks; this growth is tied mainly to expansion of domestic energy exploration and the renewable energy industry.
The 2014 Ford F-150 is on sale now, featuring the new F-150 Tremor, the world’s first EcoBoost-powered sport truck, and a new compressed natural gas prep option for customers to convert their F-150 to run on clean-burning, inexpensive CNG.