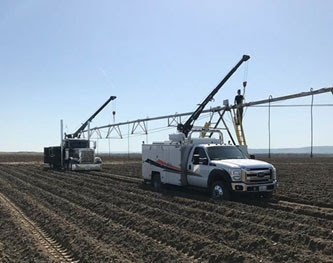 The fleet at Boorman Farms consists of 9 semitrucks, 4 tractors, and 6 trucks, 4 of which are service trucks used to repair the farm’s equipment.

Three years ago, in 2017, Boorman Farms was ready to add a new service truck to their fleet. Nic went to Curtis Turchak, Sales Manager at Brutus Truck Bodes, who had handled his father Carl’s 2016 Ford F-550 truck order just one year prior. Brutus Truck Bodies, known for quality bodies built to withstand harsh environments and weather, is located in Penticton, British Columbia, about 200 miles north of Quincy. When planning this new build, Nic wanted to include a 12,000 lb hydraulic crane on the truck, which required a PTO. However, Nic was not keen on putting a PTO on the truck and idling the truck to run the crane. For Nic, keeping his engine hours low is a key factor in minimizing maintenance requirements and prolonging the life of the truck. “Longevity is important to us,” explains Nic.

That’s when Curtis showed Nic a few different options to run the crane, including the VMAC Multifunction Power System, which includes a 2,800 RPM power take-off port and hydraulic pump to run a crane. “We didn’t know that VMAC had a multi-power system,” says Nic. “We were familiar with Vanair’s Air N Arc and Miller EnPak, but not VMAC’s Multifunction.” Brandon already had an Air N Arc, and the brothers looked at Miller, but they felt it was too expensive and that it wouldn’t work the way they wanted it to. Then Curtis showed Brandon and Nic the VMAC Multifunction.

“My main concern about buying the VMAC Multifunction was the price,” notes Nic. “It would be the first one we purchased, and I couldn’t think of anyone in our area who had one for me to talk to. Around here if you’re a welder you have a Miller or Lincoln, and then you have a separate air compressor on the truck. Everything is a separate piece of equipment.”

Brutus Truck Bodies is a long-term, experienced VMAC dealer, and Curtis felt confident that if Nic was able to test out the VMAC Multifunction, he’d see it was the right choice.

“I already had a Vanair Air N Arc on my truck, and in the past, I tried to run a suitcase welder off of it. I wasn’t having good luck with it. We got the VMAC Multifunction here to the farm, and started playing with it,” adds Brandon. “It was immediately welding like a dream.”

The brothers also agree the VMAC Multifunction has created a safer working environment due to the ability to use it to power a crane. “When you have a front-end loader picking things up, and you’re working on them, you’re at the mercy of the other operator. But when you have the controls for a crane, you’re in control. It’s a lot steadier and safer.”

It’s now been several months since Brandon got his new service body from Brutus Truck Bodies, and he’s noticed the VMAC Multifunction is getting a lot of attention. “In our area, it stands out,” says Brandon. “People stop and ask questions. I show them the remote controls, and how easy it is to use.”

Not only is Brandon getting questions about his service truck and the VMAC Multifunction air compressor, welder, generator combo, but he’s actually sold it! “Everything is for sale for the right price,” notes Brandon. “A guy came into the yard and fell in love with my new service truck. The VMAC Multifunction was a big selling feature, and a major reason he wanted to buy. He does 24/7 roadside service, and this machine allows him to do everything. There’s enough power to run the trailer, weld on the road, plus the best air compressor.”

It’s clear that when farmers are selling their service trucks as a side hustle, they know their stuff. Brandon and Nic are experienced, and they know what they need and want in their service trucks and equipment to continue running their successful farming business. They need to be able to rely on their investment to keep operations running smoothly, and Boorman Farms has found a winning combo with Brutus Truck Bodies, and the VMAC Multifunction.

About Brutus Truck Bodies Brutus Truck Bodies by Nor-Mar Industries Ltd. is known for their heavy-duty truck bodies designed specifically for harsh applications in forestry, construction, mining and oilfield sectors in the rugged Pacific Northwest. Quality is the cornerstone of their business, and Brutus even has its own in-house training school for their fabricators, as well as an in-house engineer using state-of-the-art 3D CAD software.

But what really matters, are the testimonials from customers like the Boormans, who trust Brutus Truck Bodies for the consistent quality of their builds

“I like to research truck bodies, it’s like an addiction I have,” confesses Brandon. “We’re on our third and fourth Brutus body and they’re some of the best I’ve ever seen.” Superior quality and attention to detail are other traits of this truck builder that Brandon appreciates. And while farming conditions may not be as severe as mining, the environment is still harsh, and it’s important to Boorman Farms that their trucks and equipment last a long time. “At Brutus, they don’t rush or cut corners. Everything has to be perfect, or they’ll fix it and redo it for their customers.”

Posted by Northside Ford Truck Sales at 8:30 AM