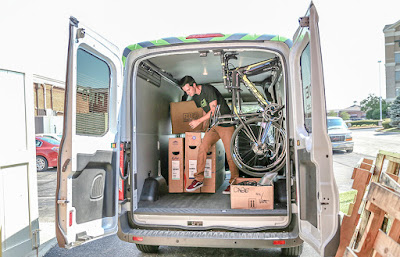 DEARBORN, Mich., Oct. 1, 2015 –
Small business owners often need vehicles that can do double duty –
helping them grow their businesses while keeping their busy families on
the move, finds a new survey by Ford and Manta, an online resource
dedicated to small business.

“Dual use was one of the key considerations in the design of Ford
Transit Connect,” says Yaro Hetman, Ford brand manager for Transit,
Transit Connect and E-Series. “Customers appreciate the seats fold down
for deliveries during the week and the vehicle works well as a family
van on weekends.”

Regardless of which vehicle they choose, flexibility is key for these
entrepreneurs. Nearly half report they use their business vehicle
primarily for driving themselves to appointments, 36 percent use it to
carry equipment to job sites, 30 percent make deliveries and 8 percent
transport customers.

“One day we’re using our Transit to move merchandise between stores,
the next day we’re using it for event support for charity functions,”
says Stuart Hunter, founder of Columbus, Ohio-based roll:,
which sells bicycles, clothing and gear. “The next day it’s supporting
our race team – where it becomes a mobile changing room. The versatility
was really key to us.”

Hunter is one of three small business owners who won $5,000 to upfit Ford Transit and Transit Connect vans in the Driving the American Dream contest conducted by Ford and Manta. The other winners are Steve Ozment, owner and operator of Flowerama in Columbus, and Manuel Mendoza, owner of La Patisserie, a bakery and catering company in Charlotte, North Carolina.

Business errands
are made more efficient when entrepreneurs can leverage mobile
technology in their vehicles, according to the survey.

Almost three-quarters of respondents say they would be more
productive if they could make hands-free calls through a
Bluetooth-enabled system like SYNC® 3 – Ford’s new
communications and entertainment technology that features faster
performance, more conversational voice recognition, a more intuitive
smartphone-like touch screen and easier-to-understand graphical
interface to help Ford customers connect on the road.

For some respondents – 25 percent – hands-free phone calls are the
No. 1 thing that gets them through spending a lot of time in their
vehicles. For others, snacks help them power through.

“When I’m traveling in the Transit, my dirty little secret is beef
jerky,” says Hunter. “It only happens within the Transit. It’s the only
place I’ll eat beef jerky. It’s kind of like White Castle – never before
midnight – so I have a passion for beef jerky I’m not sure even my wife
knows about.”

In addition to
making the most of their time on the road, small business owners are
keen on maximizing their financial resources. Half say purchase price is
a top consideration when determining which vehicle to buy for their
businesses.Ford Transit is the best value for fleets in five out of six
full-size van categories, based on Vincentric 2015 fleet awards analysis
of full-size vans. The short-wheelbase midsize Ford Transit Connect XLT
was named Best Fleet Value in Vincentric’s mini passenger commercial
van category.

Nearly one quarter of survey respondents say maintenance is a top consideration.

“The reason I continue to buy Ford vehicles is they hold up, as
they’re not expensive to maintain, because they do what they say they’re
going to do,” says Ozment, who uses Transit Connect to deliver flowers.
“That one is checked off the list. Our Transit Connect is rock solid –
unequivocally the right answer.”

Ford Transit and Transit Connect can be repaired at any of more than
3,000 Ford dealer locations across the United States, and the Ford
Business Preferred Network includes nearly 600 dealers with advanced
commercial vehicle expertise. More than 80 percent of commercial
customers are located within 30 miles of a Ford Business Preferred
Network dealer and more than 63 percent are within 10 miles.

Other factors guiding small business vehicle purchases include fuel
costs for 22 percent of respondents, repairs for 17 percent and
insurance for 11 percent of small business owners,  according to the
survey. More than 10 percent say resale value is a top consideration.
Ford Transit Connect retains its value better than any other vehicle in
its segment, based on ALG's residual value forecast for the 2015 model
year.

Many of the small business owners surveyed feel strongly their
vehicle purchases should support other American businesses. Nearly 65
percent say it matters that their vehicle is assembled in the United
States.

Transit – the best-selling commercial van in America – is assembled
at Kansas City Assembly Plant with domestic and foreign parts.

Ford Motor Company, a
global automotive industry leader based in Dearborn, Michigan,
manufactures or distributes automobiles across six continents. With
about 195,000 employees and 66 plants worldwide, the company’s
automotive brands include Ford and Lincoln. The company provides
financial services through Ford Motor Credit Company. For more
information regarding Ford and its products worldwide, please visit http://corporate.ford.com.

Manta empowers small business owners to succeed on their
own terms by helping them stand out, connect with customers and grow
their companies. Our solutions include a small business directory with
millions of unique monthly visitors, proven tools to drive lead
generation and a suite of products to manage critical business needs. We
strive to inform and inspire through learning opportunities,
proprietary research, and a robust online community for dialogue and
collaboration. Thousands of business owners join Manta each month. Visit
manta.com to learn why.
Posted by Northside Ford Truck Sales at 8:30 AM