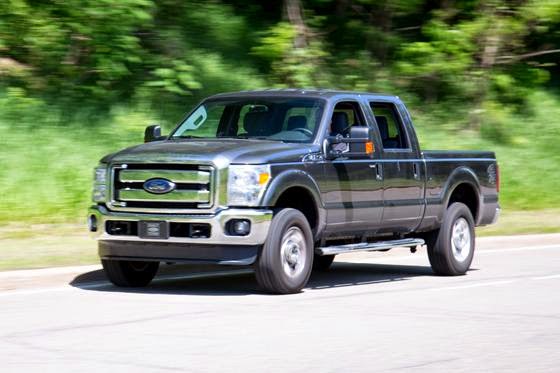 We've known this was coming for a while but Ford made it official when Raj Nair, Ford's head of product development, announced to a group of current and potential investors that the next-generation Super Duty will also be adopting an aluminum body — just like the new F-150.

The Detroit News reported the announcement while automotive journalists are test-driving the 2015 F-150 in Texas.

Ford has not announced when the next Super Duty will debut, but given the fact our spy photographer have caught quite a few Super Dutys testing this past June, August and September, we're guessing the next truck could debut as a 2016 or 2017 model. Our spies even saw one burn to the ground.

Since all Super Dutys (which account for about half of all F-Series sales at a healthy profit margin) are currently produced at only one site — the Kentucky Truck Plant in Louisville — modifying it presents a problem. To prepare for the 2015 F-150, Ford shut down one plant for modification while still producing the half-ton at its other F-150 plant. Ford can't do that with the Super Dutys.

When the Kentucky plant is shut down for the eight to 10 weeks (and that might be an optimistic amount of time) to refit for the new Super Dutys, it will deliver a huge hit to Ford's bottom line. You can bet Chevrolet, GMC and Ram will be ready to take advantage of the changeover by offering special deals on heavy-duty models during Ford's plant shutdown. However, it wouldn't surprise us if Ford had some type of backup plan to produce Super Dutys somewhere else.

Source: http://news.pickuptrucks.com/2014/11/fords-next-generation-super-duty-goes-aluminum-too.html
Posted by Northside Ford Truck Sales at 4:18 AM