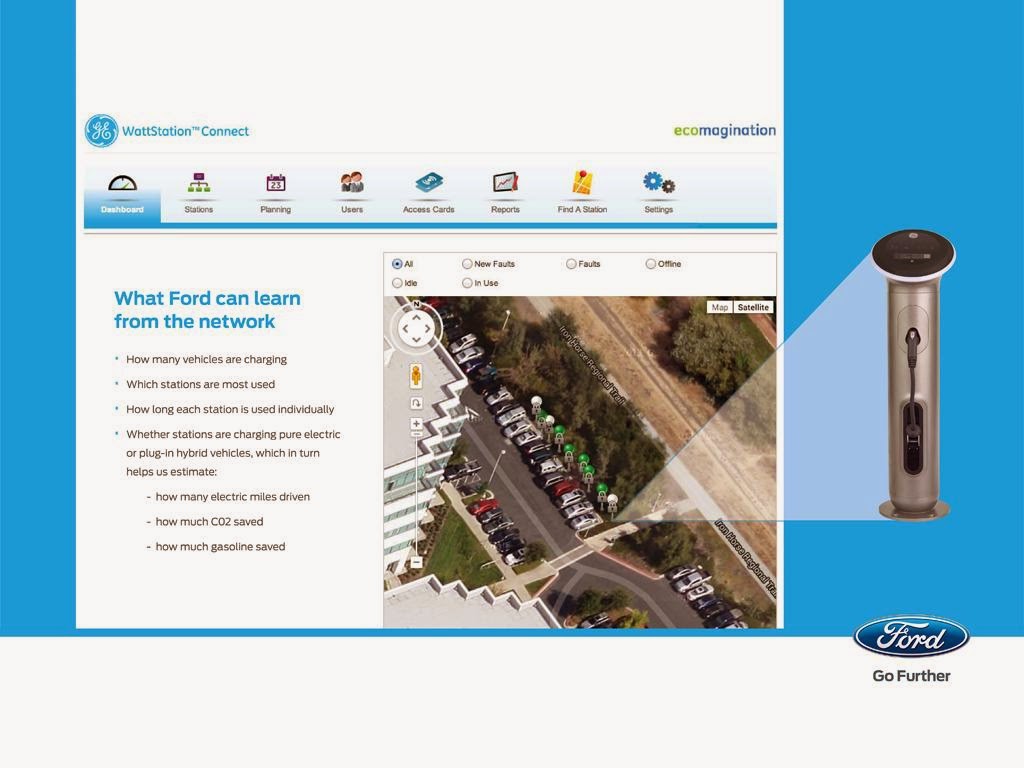 Ford to install its first employee electric vehicle charging station network in Dearborn, Mich.; facilities across the United States and Canada to follow

Ford will work with GE as its network provider and supplier of electric vehicle charging stations; networked stations will help Ford understand charging usage and plan for future installations

Ford Motor Company in conjunction with GE, will supply vehicle charging stations at Ford facilities nationwide, beginning with facilities in and around its headquarters.

The announcement continues the innovative cooperation begun more than 100 years ago between Henry Ford and Thomas Edison, co-founder of GE.

This month, Ford will begin installing GE WattStation™ charging stations across its North American campuses, developing a workplace charging network at nearly every Ford facility in the United States and Canada.

“Ford’s commitment to sustainability extends beyond our fuel-efficient vehicles to include our daily workplace,” said Mike Tinskey, Ford director of vehicle electrification and infrastructure. “We know that a growing electrified vehicle infrastructure is key to making plug-in vehicles a viable option for more consumers. Ford is committed to doing its part to help develop that infrastructure.”

With the new charging network, Ford employees commuting to their jobs from up to 21 miles away in plug-in hybrid vehicles – Fusion Energi and C-MAX Energi – may be able to drive entirely on electric power to and from work. Fusion Energi and C-MAX Energi have an EPA-estimated MPG ratings 44 city, 41 highway and 43 combined and have an EPA-estimated range of 21 miles electric. Drivers of the electric-only Focus Electric, which has an EPA-estimated range of 76 miles on a full charge, will have even more gas-free commuting potential*.

Ford plans to install electric vehicle charging stations at more than 60 of its offices, product development campuses and manufacturing facilities. Installation will begin at Ford’s southeast Michigan facilities and roll out across other facilities throughout 2014.

Throughout North America, the number of charging stations – both public and residential – is growing rapidly. In 2009, there were 3,000 known public charge stations. Today, there are more than 20,000.

The Ford charging service will be free to employees for the first four hours of charging each day. By offering free charging, Ford is trying to encourage charging station sharing, enabling twice as many employees to charge at work for free.

Ford is also asking employees to use the MyFord® Mobile smartphone app to collect driving and charging information to help the company understand driving patterns and potentially influence future product design. Ford estimates it will cost about 50 cents to fully charge each vehicle**.

Ford’s WattStation charging station installation differs from other workplace charging installations in that the units will be networked together. As a result, the company will be able to gather comprehensive information on electrified vehicle use, such as the number of hours vehicles are charging and the amount of carbon dioxide reduced. It can then use actual station data to plan for additional station installations.

GE was the first major company to add C-MAX Energi vehicles to its fleet. Ford and GE are working with researchers from Georgia Institute of Technology to study GE fleet driving and charging habits, with the goal of improving all-electric driving and charging performance. Ford’s MyFord Mobile app provides drivers with real-time battery charge status and a value charging option that automatically schedules charging at lower-cost, off-peak electricity rates (based on your local utility’s participation).

Ford Fusion Energi and C-MAX Energi drivers typically make three of their four daily trips in all-electric mode, based on data from Ford’s MyFord Mobile app. It is estimated Ford customers now have logged 65 million all-electric miles, increasing at a rate of 290,000 electric miles per day, by driving the full range of plug-in vehicles, saving more than 4 million kilograms of CO2.

By adding another charge opportunity during the day at the workplace, it might be possible for employees to be able to accomplish all of their workweek trips without using gasoline.

Early work between Henry Ford and Thomas Edison
Henry Ford’s history of working with Thomas Edison dates back to the late 1800s, when Ford worked for the Edison Illuminating Company in Detroit. In 1892, Edison co-founded General Electric. In 1896, Ford attended a lecture given by Edison, which inspired him to discuss his ideas with the renowned scientist, thus beginning a strong friendship that endured for the rest of their lives. 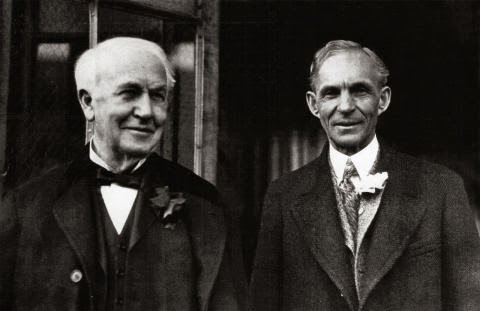 Henry Ford had a strong interest in electric vehicles. He bought two for his wife, Clara, in 1908 and 1914, and installed a charging station in their garage. Several years after Ford Motor Company was founded in 1903, Ford and Edison began experimenting with their own electric vehicles using Edison batteries. The vehicles never went to market, but it marked the beginning of a relationship between the two men’s companies that stands strong today. Last fall, GE purchased 2,000 Ford C-MAX Energi vehicles, supporting its goal of converting half of its fleet to alternative energy vehicles. Today’s charging station announcement further proves the companies’ commitment to the growth of the electrified vehicle market.

Join a Google Hangout with Ford and GE
Triple Pundit will host a Google Hangout with Mike Tinskey from Ford, Debora Frodl, global executive director of Ecomagination at GE, and Hauker Asgeirsson, manager of power systems technologies at Detroit Edison, to discuss what’s happening in global energy innovation, as well as the challenges and changes envisioned for the future – whether they be in transportation, in the home or on the grid. The event will be presented live on March 20, 2014 at noon EDT. To join, please visit http://www.triplepundit.com/2014/03/live-chat-ford-motor-co/. You can also submit questions for the panelists via the comment section at the same site.

Ford Motor Company, a global automotive industry leader based in Dearborn, Mich., manufactures or distributes automobiles across six continents. With about 181,000 employees and 65 plants worldwide, the company’s automotive brands include Ford and Lincoln. The company provides financial services through Ford Motor Credit Company. For more information regarding Ford and its products worldwide, please visit corporate.ford.com.
Posted by Northside Ford Truck Sales at 9:00 AM