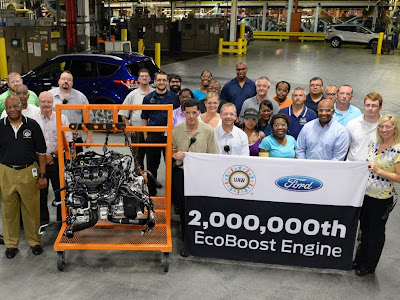 Ford Motor Company today celebrates a manufacturing milestone for its fuel-saving EcoBoost engines: Two million have been produced globally since the 2009 launch of the engine line.
Growing customer demand for EcoBoost-powered vehicles in major markets worldwide is driving engine production higher. Factory output now averages more than 100,000 engines per month, up from 65,000 in 2012.
“Ford EcoBoost delivers great performance with lower fuel bills, a recipe that is proving incredibly popular with consumers around the world,” said Joe Bakaj, vice president, powertrain engineering for Ford. “EcoBoost engines are attracting new customers to the Ford brand every day, and our plants are working hard to keep up with demand.”

A Ford Escape powered by the two millionth production EcoBoost – a 2.0-liter unit – rolled off the line at Ford’s Louisville, Ky., last week.

Working, saving… from farms to patrols
Businesses, too, are using EcoBoost-powered vehicles to cut fuel costs, while also tackling tough jobs. “The Ford EcoBoost engines provide an average mile and a half improvement over our V8-powered trucks at work,” said Lyle Azevedo, fleet manager for Grimmway Farms in Bakersfield, Calif., which is a major grower of carrots and other crops. “With a 150,000-mile life cycle and with $3.50 a gallon gas, we’re going to save over $300,000 on our fleet of 80 trucks over their lifetimes.”
The New Mexico State Police was at first hesitant to shift from V8 engines to V6s with EcoBoost technology, said Lt. Tony Gonzalez, who manages the department’s fleet of 60 Ford Police Interceptor sedans, 15 F-150 EcoBoost pickups and six Ford Fusion sedans equipped with EcoBoost engines.

Popularity, demand rising in North America
In North America, internal Ford data shows that the EcoBoost engine is now the most recognised fuel-efficient engine among consumers.
The popularity of EcoBoost in North America is reflected in high take rates on key models:
This year, EcoBoost will be available on more than 90 percent of North American nameplates, rising to 95 percent by 2015.
To meet demand for the award-winning 2.0-liter EcoBoost engine, Ford is investing nearly $200 million to build the engine at its Cleveland, Ohio, engine plant, with production starting in 2014.

European expansion
In Europe, Ford is doubling production capacity at its Cologne, Germany, engine plant to more than 1,000 engines a day. This move is in response to robust demand for the 1.0-liter EcoBoost engine, which was named International Engine of the Year in 2012 and 2013 by a panel of auto journalists.
Already available on five European nameplates, the 1.0-liter EcoBoost engine will be fitted to 11 models by 2014. The three-cylinder unit is being chosen by a growing share of customers this year, accounting for 43 percent of B-MAX sales, 32 percent of Focus sales, 26 percent of Fiesta sales; and 24 percent of C-MAX and Grand C-MAX sales.

The Cologne plant also has begun production of the 1.0-liter EcoBoost for the North American market. The new 2014 Ford Fiesta – which goes on sale later this year – will be the first vehicle available in the United States with the 1.0-liter engine, and is expected to be certified as the most fuel-efficient non-hybrid car available in the United States.

Growth in Asia Pacific
In Asia Pacific, sales of EcoBoost vehicles through August are up 202 percent year-over-year in 2013, including a 189-percent rise in China. Ford plans to offer the fuel-efficient engine in 20 vehicles in the region by mid-decade, a five-fold increase from 2012.

Ninety-five percent of Kuga buyers in Asia Pacific are choosing the1.6-liter EcoBoost engine, while 90 percent of Edge owners and 62 percent of Mondeo buyers are opting for the efficient engines.
Ford will soon begin production of the 1.0-liter EcoBoost at the $500 million Changan Ford engine plant in Chongqing, China, which opened in June.

Ford Motor Company, a global automotive industry leader based in Dearborn, Mich., manufactures or distributes automobiles across six continents. With about 177,000 employees and 65 plants worldwide, the company’s automotive brands include Ford and Lincoln. The company provides financial services through Ford Motor Credit Company. For more information regarding Ford and its products worldwide, please visit corporate.ford.com.

Posted by Northside Ford Truck Sales at 9:30 AM