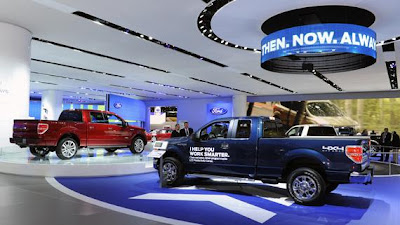 More than 65 vehicles will grace the Ford exhibit this year, including a Ford-based fire-rescue truck, a Gleaners mobile food pantry Transit Connect and Ford Police Interceptors.

“The theme of this year’s Ford stand is ‘People Serving People,’” said Elena Ford, director of Global Marketing, Sales and Service Operations. “The everyday heroes who use these commercial vehicles will be a part of the exhibit to share their experiences with guests.”

Henry Ford as your guide
To help celebrate 150 years of the man who put the world on wheels, Henry Ford – actually, an actor playing him – will guide guests around this year’s Ford stand.

Ford will start the tour near an original 1903 Model A, taking visitors through his life history while showing them Ford’s current lineup of vehicles. The full Ford showroom will be on display, as well as commercial vehicles including the all-new global Transit family.

Ford is the largest manufacturer in the global commercial vehicle segments where it competes, and North America’s best-selling commercial truck brand for 28 years. Ford is building on this leadership with introductions of the all-new Ford Transit and Ford Transit Connect vans.

The all-new Ford Transit Connect compact van is available in two wheelbase lengths and in XL and XLT trim series. Transit Connects deliver a 1,600-pound payload, 130 cubic feet of cargo space, and have an available 2,000 pounds of towing capacity. Transit Connect is expected to achieve at least 30 mpg on the highway with its 1.6-liter EcoBoost engine.

Boostical
Visitors will have the chance to produce an instant musical collage featuring the words “Eco” and “Boost” backed by sound effects. This fun sound mash-up will be shareable on social media networks instantly.

Taurus talent search
Guests interested in becoming a Taurus product specialist will be able to audition by recording a video. Participants will be given a short script to share via social media. Those with the highest number of “likes” will win the title of Best in Show.

Blue Oval card
For the second year, the display will feature Ford’s Blue Oval card, offering visitors a more focused, personalized experience they can share with their family and friends. Visitors can register online to receive a Blue Oval card, which they can then use to access relevant content throughout their time on the Ford stand.
Posted by Northside Ford Truck Sales at 4:34 PM