LOUISVILLE, Ky., June 13, 2012 – Ford Motor Company, its employees, dealers and suppliers today are celebrating production of the all-new Ford Escape at the company’s transformed Louisville Assembly Plant, one of several U.S. manufacturing sites where Ford is adding jobs to meet strong customer demand for fuel-efficient vehicles.
Ford already has added 1,800 jobs at Louisville Assembly Plant and is adding 1,300 additional workers to a third shift this fall, bringing total hourly employment at the plant to 4,200.
Nationwide, Ford has added more than 5,200 hourly jobs already this year. With Louisville’s third-shift in place, by year end, Ford is set to deliver more than half of the 12,000 additional jobs it committed to add by 2015 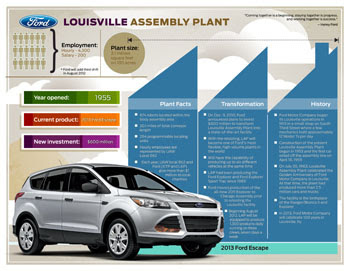 The company invested $600 million to convert Louisville Assembly from a plant producing body-on-frame SUVs into a facility that builds America’s most fuel-efficient small utility vehicles with automatic transmissions.

“Today marks a celebration of progress and transformation,” said Mark Fields, Ford’s president of The Americas. “Louisville Assembly Plant’s reinvention illustrates how Ford is going further, continuing to invest in American manufacturing and new jobs while delivering even more of the fuel-efficient vehicles that give customers true power of choice.”

The upgraded Louisville Assembly Plant is capable of producing up to six different vehicles at the same time, making it Ford’s most flexible U.S. plant.

As part of the upgrade, Ford installed new tooling and improved equipment in the plant’s final assembly area and body shop, including more than 1,000 robots and 20 miles of conveyors. Reprogrammable tooling in the body shop allows the plant to produce multiple vehicle models at the same time without requiring downtime for tooling changeover.

“Manufacturing flexibility is critical to staying competitive in today’s global automotive marketplace,” said Jim Tetreault, Ford vice president of North America Manufacturing. “Our ability to produce up to six vehicles from a single plant gives us a sizable advantage in quickly adjusting our products and volumes to match changes in customer preferences and market factors.”

Louisville Assembly is the third Ford plant in North America to retool from producing traditional body-on-frame trucks and SUVs to fuel-efficient vehicles from global platforms.

The company’s investment in Louisville is supported by strong partnerships at the state, county and local level, as well as by Ford’s green partnership with the U.S. Department of Energy. Louisville Assembly Plant is one of 11 Ford facilities in the U.S. participating in the Advanced Technology Vehicles Manufacturing Loan Program initiated by Congress and implemented by the Obama administration.

“This is a day of celebration for Ford and the Commonwealth of Kentucky,” said Gov. Steve Beshear. “Production of the new Escape not only means thousands of jobs for Kentuckians, it boosts our GDP, tax revenue, and raises the level of the Commonwealth’s robust automotive industry, which is already one of the top five in the nation.”

Louisville Mayor Greg Fischer added: “This is a great day for our city. Ford’s history and Louisville’s history are intertwined, and today we begin a new chapter in that heritage – a chapter of business expansion and job growth.”

The Louisville-built Escape is the first of the new line of compact SUVs to be built off of Ford’s global C-car platform. The same vehicle will be built and sold in Europe and China, where it is called Kuga, although there will be unique powertrains and features for customers in those markets.

Ford’s global supply network is playing a key role in the launch of the Escape, as well as the economic development of the Louisville area. Several major suppliers have invested more than $56 million locally and are in the process of adding more than 900 jobs, many of which will support the Escape. Suppliers that expanded operations include:

In addition to its manufacturing presence, Ford continues to play a significant role in the Louisville community. Through its Operation Goodwill with area dealers, Ford and its manufacturing operations expect to donate more than $1.5 million in 2011 and 2012 combined, supporting local nonprofit agencies.

Total Ford donations to Louisville-area nonprofits made since 2000 top $8 million.