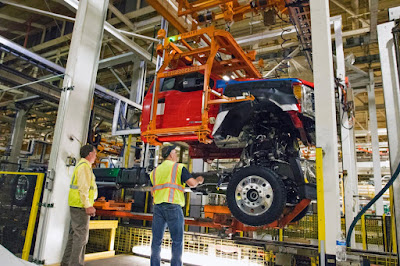 DEARBORN, Mich., April 26, 2016 – Ford Motor Company is investing $1.6 billion to upgrade two of its manufacturing facilities in Michigan and Ohio, and creating or retaining 650 hourly jobs in the
United States.


The $1.4 billion investment in Livonia Transmission Plant and $200million investment in Ohio Assembly Plant are part of the $9 billioncommitment the company made in the 2015 UAW-Ford collective bargaining
agreement to continue investing in its U.S. plants.

“We are proud that Ford employs more hourly workers and builds more vehicles in the United States than any other automaker,” said JoeHinrichs, Ford president, The Americas. “We are committed to
manufacturing in the United States, as we have been for more than 100years.”


Ford’s latest investment creates or retains 500 hourly jobs in Michigan at Livonia Transmission Plant to build a new 10-speed transmission to be first introduced in the all-new F-150 Raptor and certain F-150 models. The investment and 150 hourly jobs at Ohio Assembly Plant, located in Avon Lake, will be used to build Super Duty chassis cab. Both F-Series trucks are part of Ford’s toughest, smartest,
most capable truck lineup ever.


“I am thrilled that through our collective bargaining with Ford we were able to secure a substantial investment for the communities of Southeast Michigan and Northeast Ohio,” said Jimmy Settles, UAW vice
president, National Ford Department. “The men and women of both Livonia Transmission and Ohio Assembly have shown a great commitment to manufacturing quality products, and we look forward to their continued success.”


Ford Motor Company is a global automotive and mobility company based in Dearborn, Michigan.
With about 199,000 employees and 67 plants worldwide, the company’score business includes designing, manufacturing, marketing, financing and servicing a full line of Ford cars, trucks, SUVs and electrified
vehicles, as well as Lincoln luxury vehicles. At the same time, Ford is aggressively pursuing emerging opportunities through Ford Smart Mobility, the company’s plan to be a leader in connectivity, mobility,
autonomous vehicles, the customer experience, and data and analytics.

For more information regarding Ford, its products worldwide or FordMotor Credit Company, visit www.corporate.ford.com.
Posted by Northside Ford Truck Sales at 8:30 AM