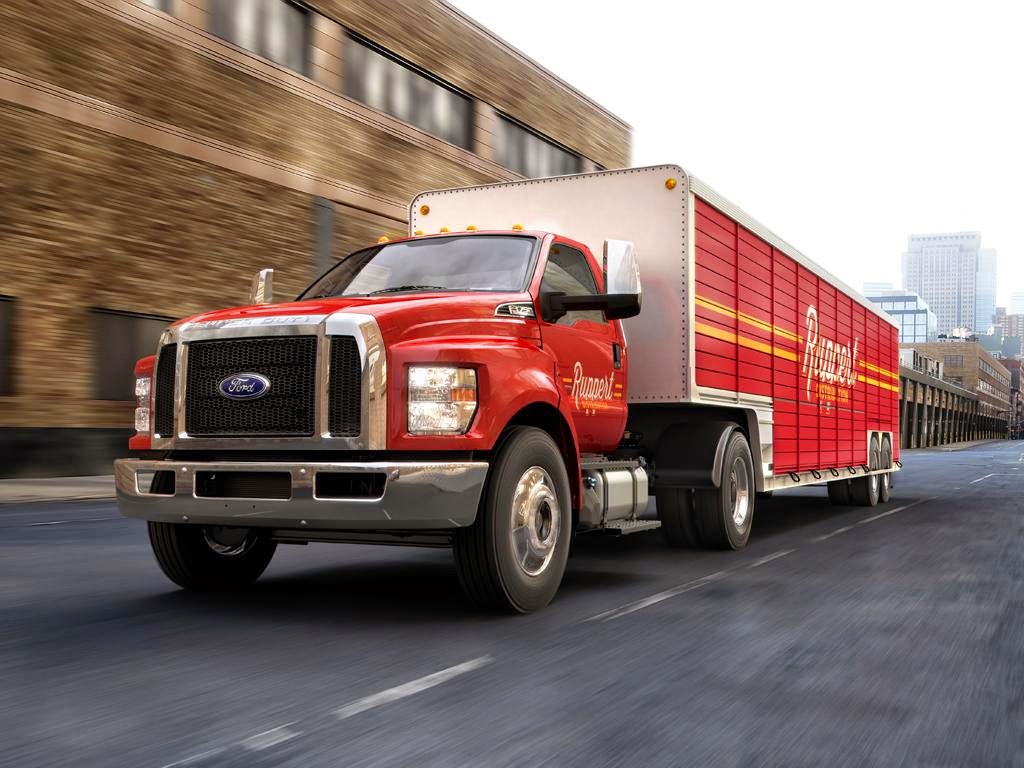 INDIANAPOLIS, March 3, 2015 – Ford is lowering noise levels in the all-new Ford F-650/F-750 – the company’s toughest, smartest and best-value F-650/F-750 medium-duty commercial trucks ever – to give drivers and their customers a quieter, more comfortable experience inside and out.


Thanks to its exclusive Ford-designed and -built 6.7-liter Power Stroke® V8 turbocharged diesel engine, those inside and outside the truck will notice a quieter, more refined sound compared to the previous F-650/F-750’s diesel engine.


“Our all-new F-650/F-750 medium-duty trucks are purpose-built to give our hardworking vocational customers maximum capability,” said John Ruppert, general manager, Ford Commercial Vehicle Sales and Marketing. “While the truck is able to work harder, we also made life inside the cab easier. Lowering in-cab and exterior noise levels improves driver comfort and minimizes disturbances while idling at work sites.”

Decibels measure the intensity and power of sound. Each 10-unit increase represents a 10-fold increase in sound power, so a 10 decibel sound is 10 times more powerful than a zero decibel sound, and 20 decibels is 100 times stronger than zero decibels.


The 2016 Ford F-650/F-750 with the available 6.7-liter Power Stroke V8 diesel engine is 35 percent quieter at idle than the previous model for a listener standing outside in front of the grille.


Ford is the only medium-duty truck manufacturer that designs and builds its own diesel engine and transmission combination – ensuring the powertrain will work seamlessly with all chassis components and vehicle calibrations. This approach enables Ford engineers to optimize vehicle performance across the entire lineup and further refine the powertrain to specific customer needs.


Enhancements to the Power Stroke combustion system, structural integrity of the compacted graphite iron block and single turbocharger mounted to the engine block account for many of the noise, vibration and harshness improvements over the previously offered diesel engine.


Specific design upgrades were made to the fuel injectors to optimize the combustion process, which features a two-stage combustion event instead of a single-injection event, further avoiding harsh, sudden and loud combustion. A starter or pilot fuel injector in the 6.7-liter engine begins the compression process before the main injection. The result is smoother combustion with less diesel clatter and a reduction of intrusive engine sound both inside and outside the truck.


At idle, two pilot injection events are used to make the firing process even smoother and to aid in quietness. The “ticking” of the high-speed injectors is masked by specially designed covers on the engine.


In addition to its Power Stroke diesel engine, Ford remains the only automaker in the segment to offer a gasoline-powered engine for a medium-duty truck. The 6.8-liter V10 engine with 320 horsepower and 460 lb.-ft. of torque is now available for both F-650 and F-750 models with the TorqShift® heavy-duty six-speed automatic transmission. The 6.8-liter V10 engine can be factory-prepped for converting to compressed natural gas or propane autogas as cost-effective alternatives to gasoline.


Offered in Regular Cab, SuperCab and Crew Cab styles and in straight-frame, dock-height and an all-new dedicated tractor model for heavy towing applications, the 2016 F-650/F-750 features a bold look inside and out.


The area behind the cab was redesigned to more easily accommodate custom work bodies, such as tow truck, dump truck and ambulance bodies.


The new medium-duty truck lineup will be available this summer and built at Ohio Assembly Plant.


Ford Motor Company, a global automotive industry leader based in Dearborn, Michigan, manufactures or distributes automobiles across six continents. With about 187,000 employees and 62 plants worldwide, the company’s automotive brands include Ford and Lincoln. The company provides financial services through Ford Motor Credit Company. For more information regarding Ford and its products worldwide, please visit http://corporate.ford.com.
Posted by Northside Ford Truck Sales at 7:40 AM