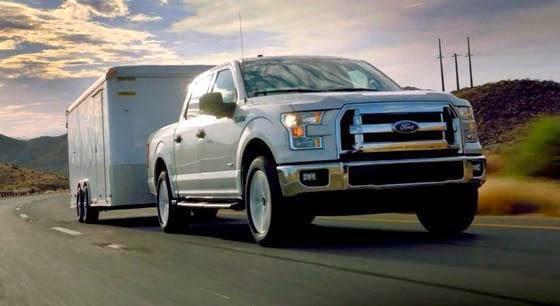 We've been hearing about new all-aluminum 2015 Ford F-150 since the beginning of the year when it was revealed at the 2014 North American International Auto Show in Detroit, but details on the truck's engines have been kept under wraps. Ford is now slowly beginning to peel back the layers of secrecy surrounding two of the F-150's powertrains, releasing some (but not all) specifications for the standard 3.5-liter V-6 engine and the brand-new turbocharged 2.7-liter EcoBoost motor.

The new standard V-6 will provide 283 horsepower and 255 pounds-feet of torque, enabling the base 2015 F-150 to tow 7,600 pounds and carry a payload of 1,910 pounds. This is a best-in-class tow rating for V-6 light-duty pickups, according to Ford. But the more interesting power option comes in the form of the new turbocharged 2.7-liter EcoBoost V-6, which is rated at 325 hp and 375 pounds-feet of torque. It's as powerful as most other truckmakers' midrange V-8 engines and enables an F-150 equipped with the 2.7-liter engine to pull 8,500 pounds and haul a payload of up to 2,250 pounds. The company believes that this is likely to be its volume engine, comprising fully half of its expected engine mix. It makes sense, Ford said, given that 85 percent of F-150 buyers tow less than 8,500 pounds and carry a payload less than 2,000 pounds.

Ford demonstrated the efficacy of the new 2.7-liter motor through a comparison with three competitors: the 2014 Chevrolet Silverado with its midrange 5.3-liter V-8, the 2014 Ram 1500 EcoDiesel with its 3.0-liter turbo-diesel V-6 and the 2015 Toyota Tacoma 4x4 (an unusual choice) featuring a 2.7-liter four-cylinder engine.

The company showed a video at a special news conference at the company's headquarters in Dearborn, Mich., that showed the 2.7-liter-equipped 2015 F-150 out-performing the Ram EcoDiesel up the Davis Dam run in northern Arizona, and besting the Chevy in two out of three runs up the same steep grade while towing a 7,000-pound enclosed trailer. The Toyota was included as a demonstration of what the an engine of comparable displacement can achieve — the 2.7-liter EcoBoost produces 166 more hp and 195 pounds-feet more torque than the big four-cylinder in the Toyota.

Sadly, no fuel economy numbers were made available by Ford; those are likely being reserved for yet another press conference in the near future. Ford did, however, demonstrate something that the public has been asking to see for months — a direct weight comparison between the outgoing truck and the new one. Ford had two F-150 Lariat models on display, one a 2014 crew cab with the 5.0-liter V-8, and the other a comparably equipped 2015 model with the 2.7-liter EcoBoost V-6. Both trucks were rolled onto electric scales, with the 2014 model weighing in at 5,674 pounds, while the new 2015 model totaled just 4,942 pounds, a difference of 732 pounds. Ford spokesman Mike Levine said that even if the 2015 had been equipped with a comparable 5.0-liter V-8, the difference would have been just 25 pounds less.

Stay tuned for more F-150 news and specs (hopefully including some fuel economy ratings) as the year progresses.

To see the video and the press release, click here. 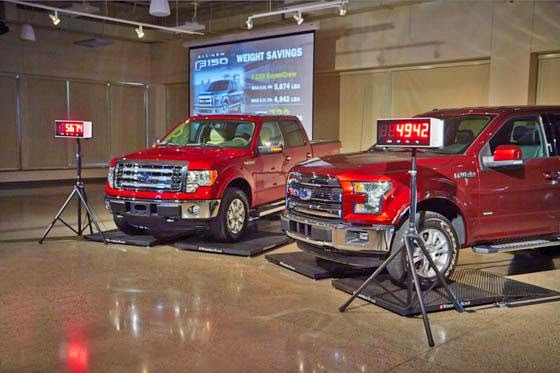 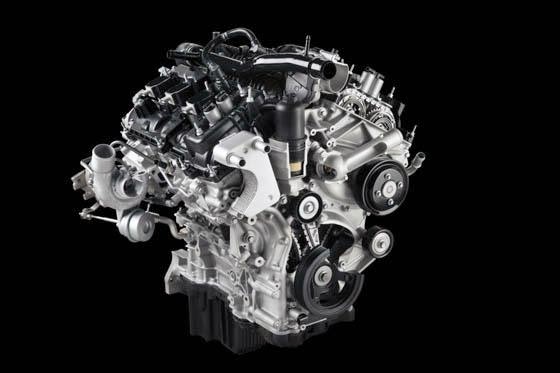 
by Mark Williams, .www.pickuptrucks.com/
Posted by Northside Ford Truck Sales at 9:00 AM