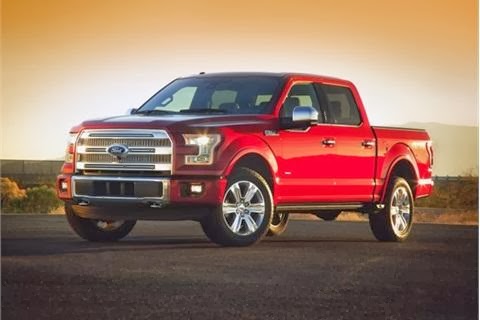 The Ford Motor Co.'s MY-2015 F-150 pickup truck will arrive as the first widely produced U.S. vehicle with a high-strength aluminum body, the automaker announced at the Detroit auto show.

Ford unveiled its completely redesigned F-150 pickup after months of speculation, providing full details about its plans for the top selling vehicle in the U.S. at the North American International Auto Show in Detroit. The vehicle will go on sale later this year.

By using aluminum rather than steel, Ford said it is reducing the curb weight of its F-150 by about 15 percent, or 700 pounds, from the 5,000-pound curb weight of the MY-2014 F-150. The move will enable the new F-150 to increase its fuel-economy rating. Ford hasn't released the truck's mpg.

However, several media outlets are reporting the full-size pickup could reach nearly 30 mpg highway.
Ford is offering a new base engine in the MY-2015 F-150 — a 2.7L, four-cylinder EcoBoost with stop-start technology. Ford will also offer a 3.5L V-6 with twin independent variable camshaft timing (Ti-VCT), the 3.5L EcoBoost, and 5.0L V-8 also with Ti-VCT.

Five trim levels include the XL, XLT, Lariat, Platinum, and King Ranch. The FX4 off-road package with electronic locking rear axle, skid plates and off-road-tuned shocks can be added to most four-wheel-drive models.