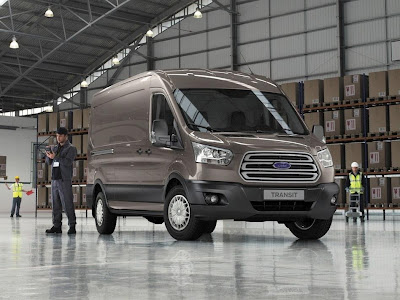 “We’re committed to offering our customers the latest technologies and design and that includes providing wider choices for those customers seeking more versatility from their van,” Graziano said. “Both are stylish, modern vans that our customers will be proud to have in their driveway and yet will have the hard-working attitude customers expected of a Ford Transit.”

The newest Ford Transit Custom and Ford Transit Cargo are the latest in a long line of market-defining Transits, which have sold 7 million vehicles since the first model was introduced in 1965.

The new model offers class-competitive load carrying ability, including a number of innovative new load-space features, such as a unique integrated roof rack system and an ingenious load-through hatch in the bulkhead for extra-long items.

In the cab, there is a modern, driver-focused cockpit, which features a sculpted instrument panel that combines stylish looks with smart stowage solutions for bottles, phones and papers.
Once behind the wheel, the driver can call upon a wide range of driver assistance technologies shared with Ford’s latest passenger cars, including the Ford SYNC voice-activated connectivity system.

The strong driver appeal of the Ford Transit Custom is reinforced by dynamics and performance which have been carefully tuned to reflect the same natural and easy-to-drive character which customers appreciate on Ford’s passenger car range, together with much reduced noise levels.

Like all Ford commercial vehicles which share the Transit badge, the all-new Ford Transit Custom has been developed to offer exceptional cost-of-ownership and durability.

Even before the vehicle goes on sale, it will have been driven the equivalent of five million kilometres, including at least 400,000 km with existing Transit customers.

Key components and systems are tested to the limit: for example, front doors go through an intensive regime of 250,000 non-stop slam cycles, which is three times more punishing than Ford’s equivalent passenger car test.

Ford Motor Company, a global automotive industry leader based in Dearborn, Mich., manufactures or distributes automobiles across six continents. With about 177,000 employees and 65 plants worldwide, the company’s automotive brands include Ford and Lincoln. The company provides financial services through Ford Motor Credit Company. For more information about Ford and its products worldwide please visit  www.corporate.ford.com.
Posted by Northside Ford Truck Sales at 9:30 AM